Join Us for the 2021 TASIS Beat the Bells Run Welcome to Kindergarten! Check out the images and captions below for an inside look at a typical Friday for a Kindergarten student in the TASIS Elementary School. 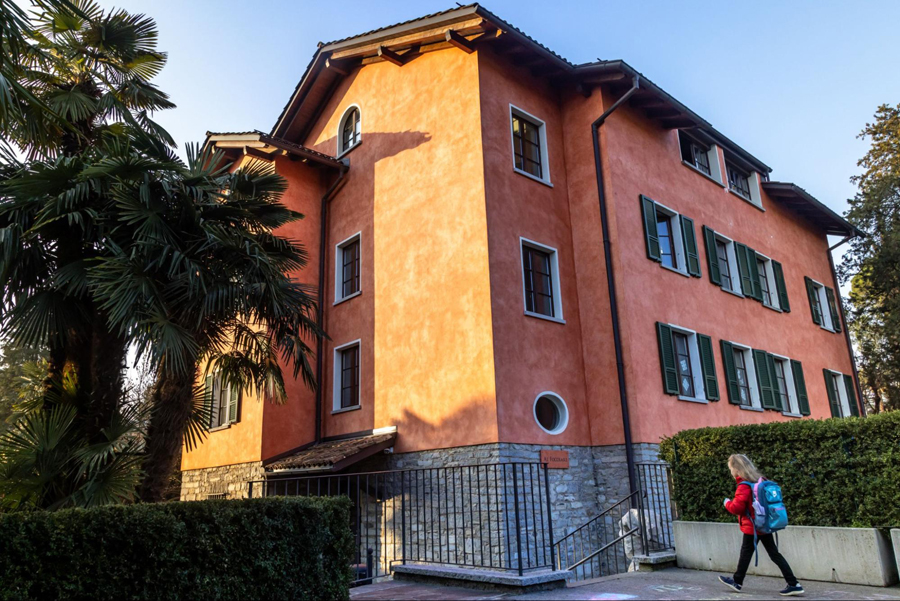 Kindergarten students attend class in Al Focolare, an Early Childhood Center comprising six classrooms with dedicated spaces for art, science, library, and physical education. Located a short walk down the hill from the main campus, Al Focolare is home to students in grades Pre-Kindergarten through 1 (ages 3–7), with its caring teachers approaching learning through hands-on exploration and play. 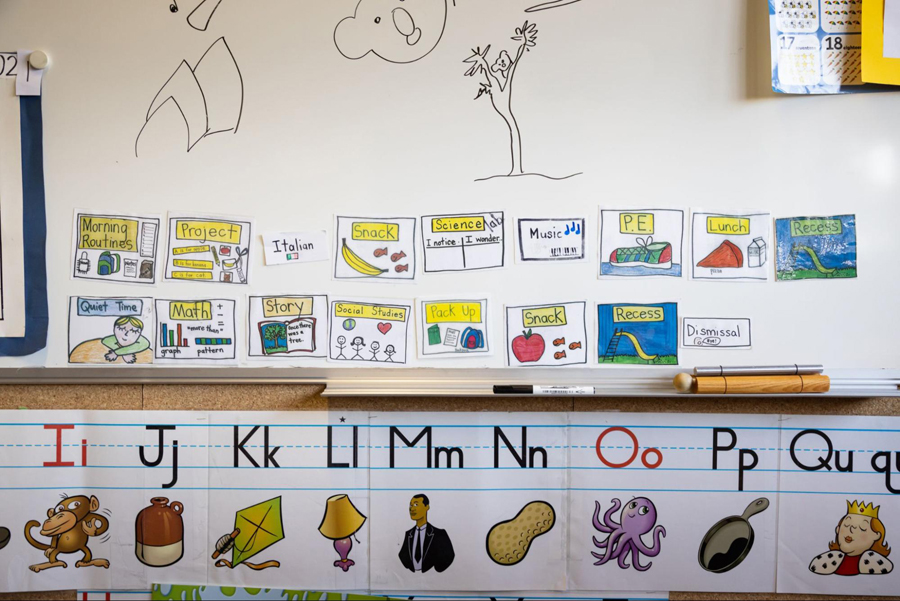 On Friday, March 5, Kindergarten students enjoyed a day packed with core academics and fun projects with their homeroom teachers as well as co-curricular programs taught by highly trained teachers in Italian, Music, Science, and Physical Education. 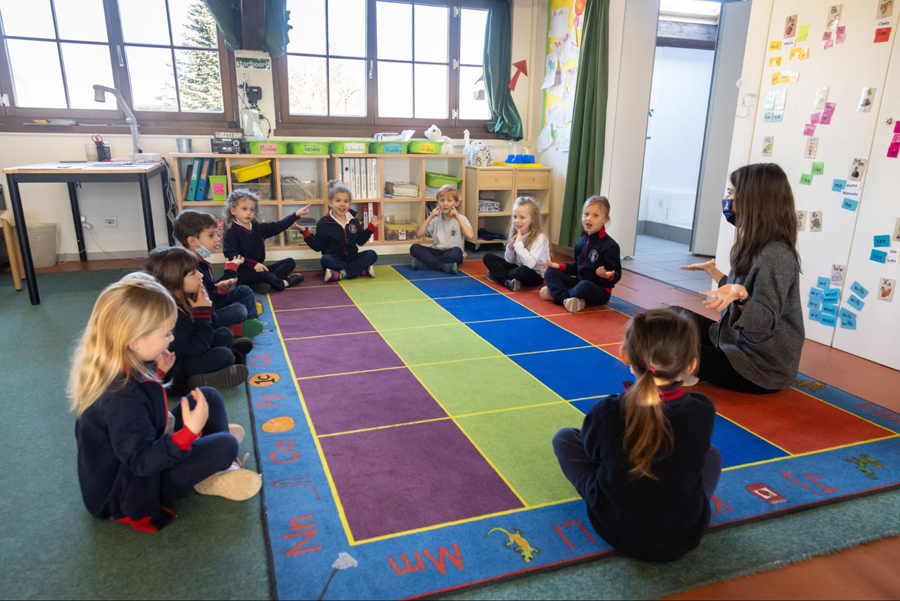 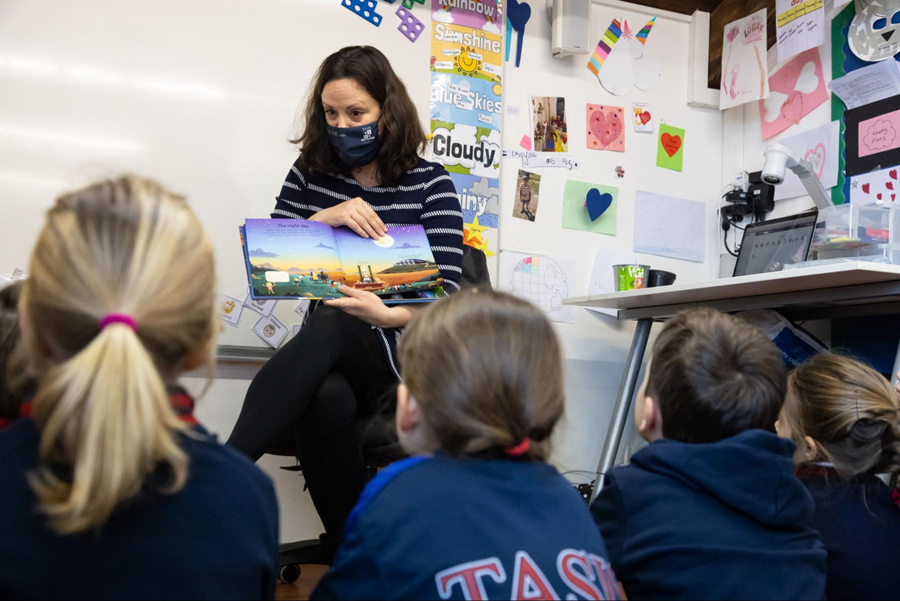 Meanwhile students in Ms. Alice Wilkinson’s class learned how to say hello in Malay, the official language of Malaysia, and read from a picture book about space. 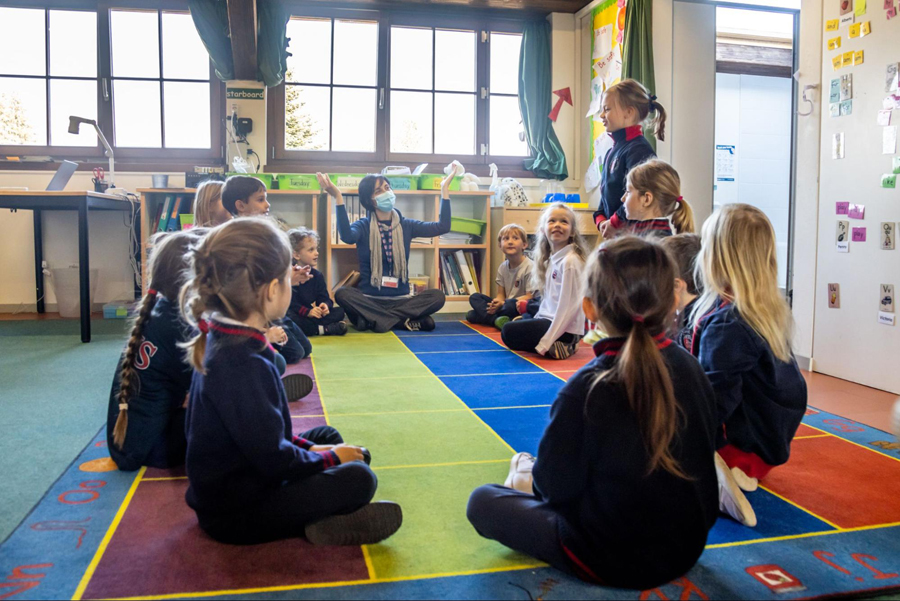 Next, the two homerooms joined together for Italian class with Ms. Laura Masone and Ms. Sissi Cavadini-Stolz. All Kindergarten students at TASIS receive their primary instruction in English, have an Italian Language class with native Italian speakers, and have bilingual instruction woven into various aspects of the program. 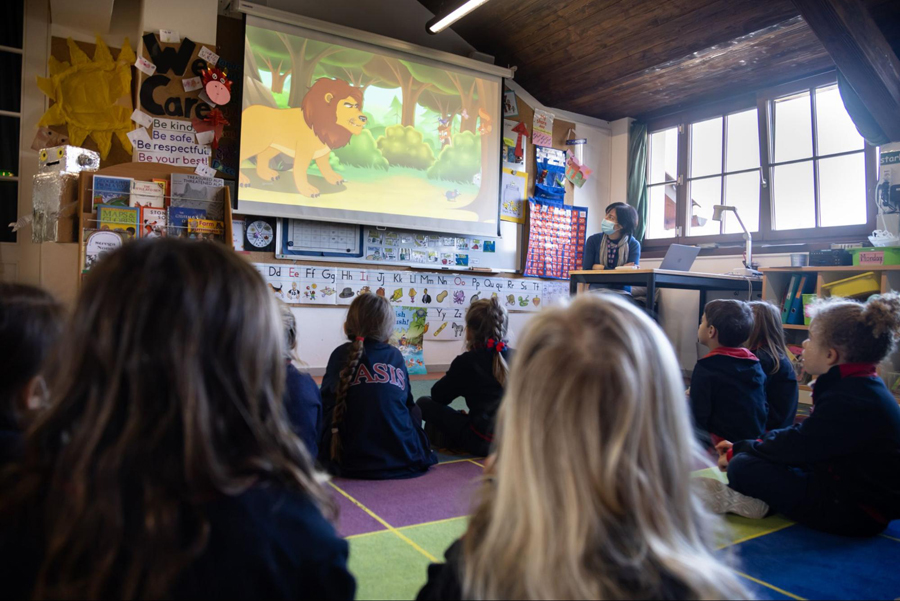 The students practiced introducing themselves in Italian and watched a short cartoon based on a classic Aesop fable, “The Lion and the Mouse.” 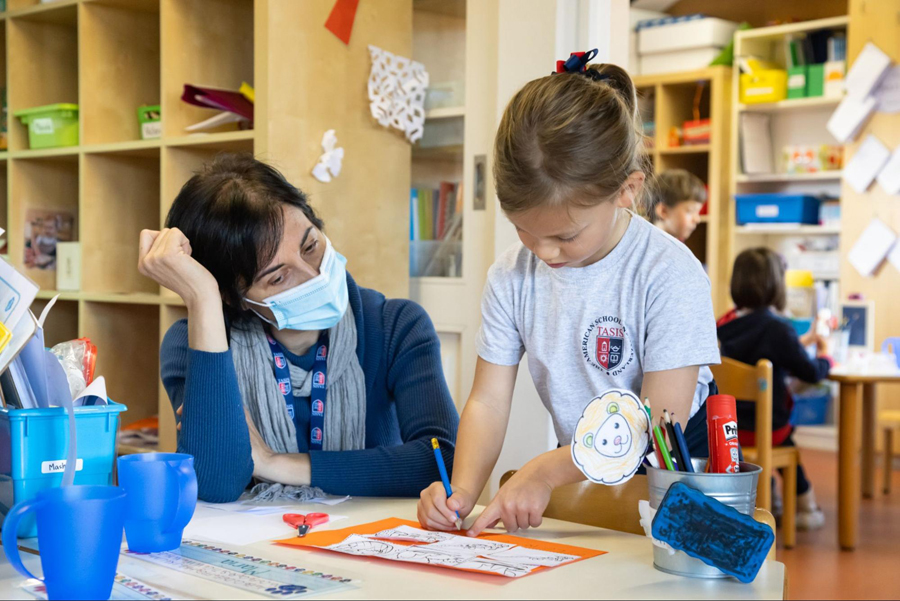 Next, the students cut out and labeled cartoon panels that corresponded with the fable. 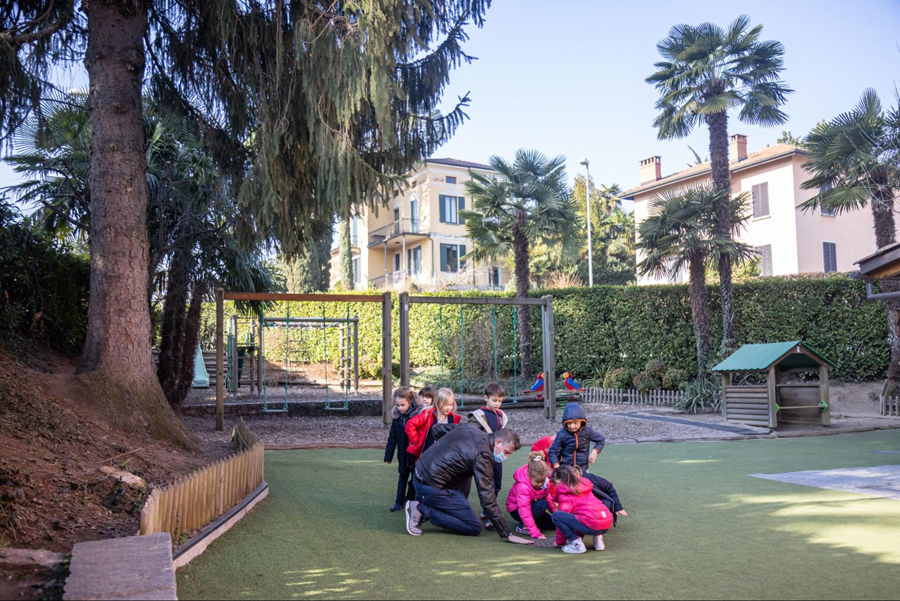 For Science, Ms. Liz’s class headed outside with Mr. Laurent Carsana, who always encourages his young students to use their natural curiosity to investigate the world. The students felt different objects—wood chips, playground equipment, stone walkways, artificial grass, etc.—and examined how each object's material, color, and location in relation to the sun affected its temperature. 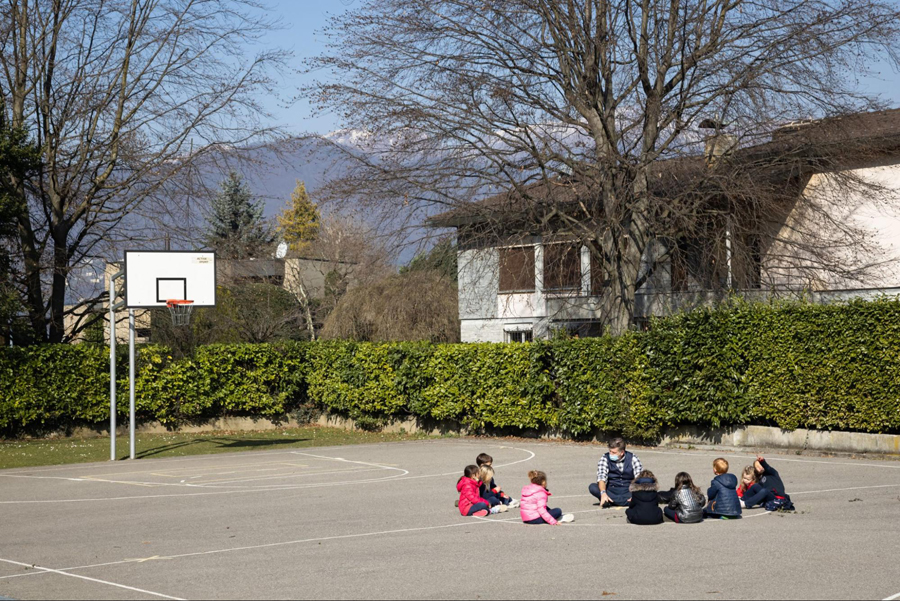 After observing the temperature of many objects around Al Focolare and the playground across the street, Mr. Laurent gathered the class to further discuss the concepts of reflection and radiation. The students observed that dark objects were much hotter than light ones and that objects directly in the sun were warmer than objects in a shadow. 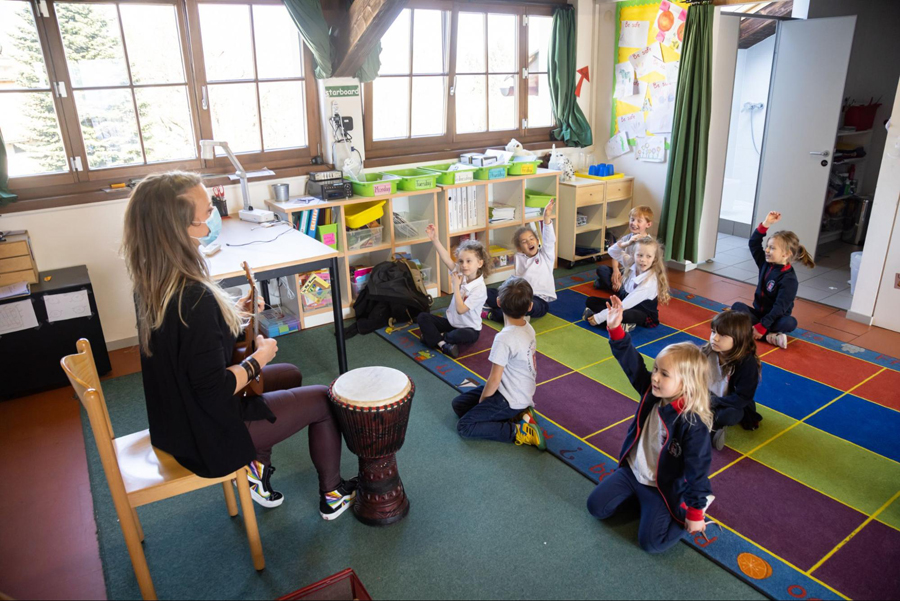 Next, half of the Kindergarteners had Music with 2019 Khan-Page Master Teacher recipient Ms. Melody Tibbits Zanecchia. The group started class by singing “hello” to each other in several languages: English, Italian, Arabic, French, Russian, Japanese, and, of course, a handful of “silly” languages the students made up on the spot. 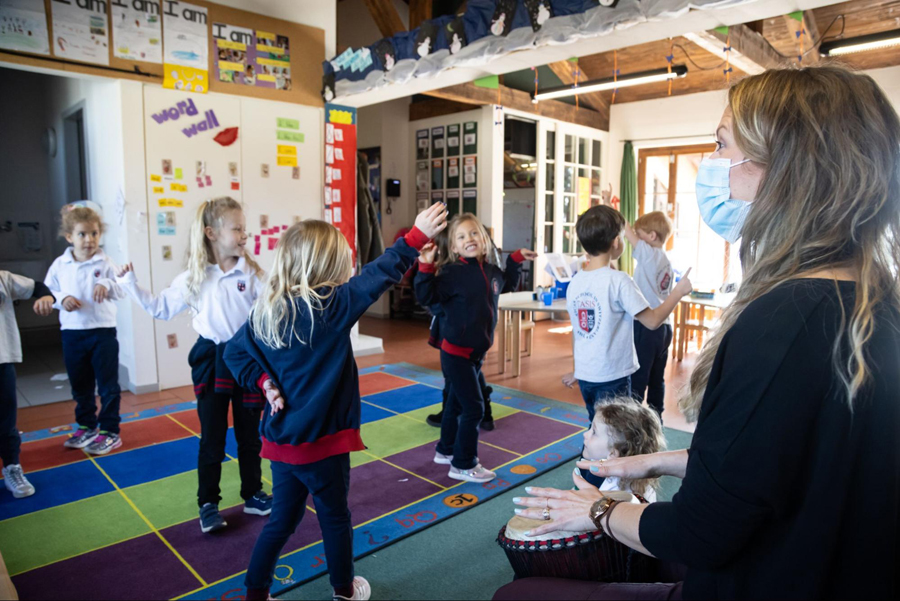 Ms. Melody then had the class move around the room, directing them to dance left and right or forward and backward, reinforcing the concept and vocabulary of opposite directions. 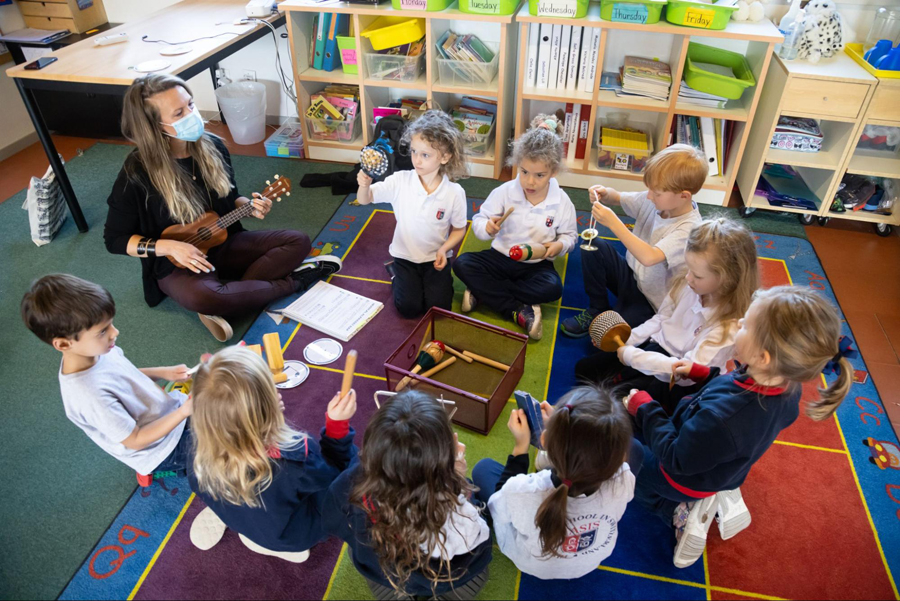 The class then experimented with a variety of small instruments to see how different objects create different sounds. The students worked together to perform an alphabet rap—striving hard to play their instruments and sing in unison. 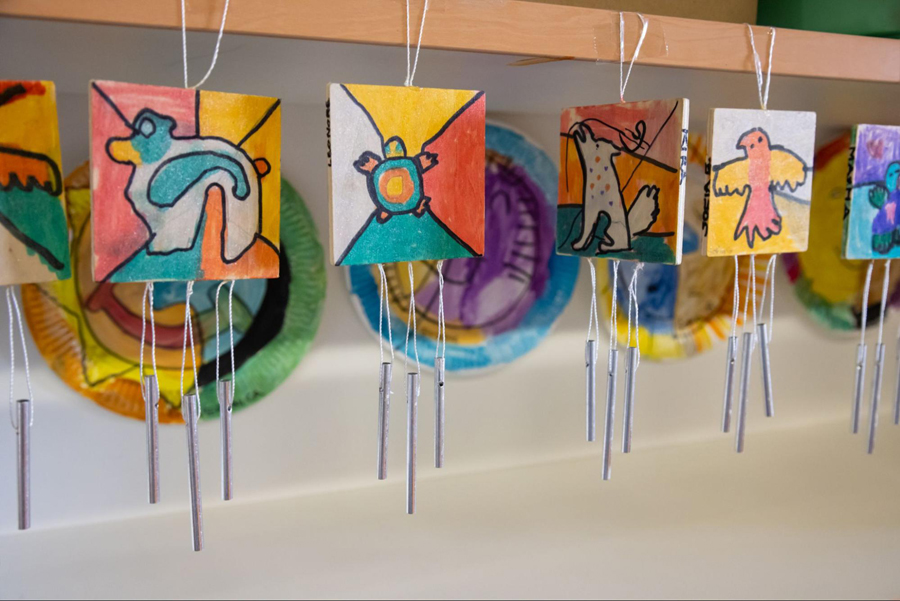 Windchimes, created with Ms. Caroline Rossi during Kindergarten Art class on Tuesdays, hung in the adjacent room with other colorful pieces of art. 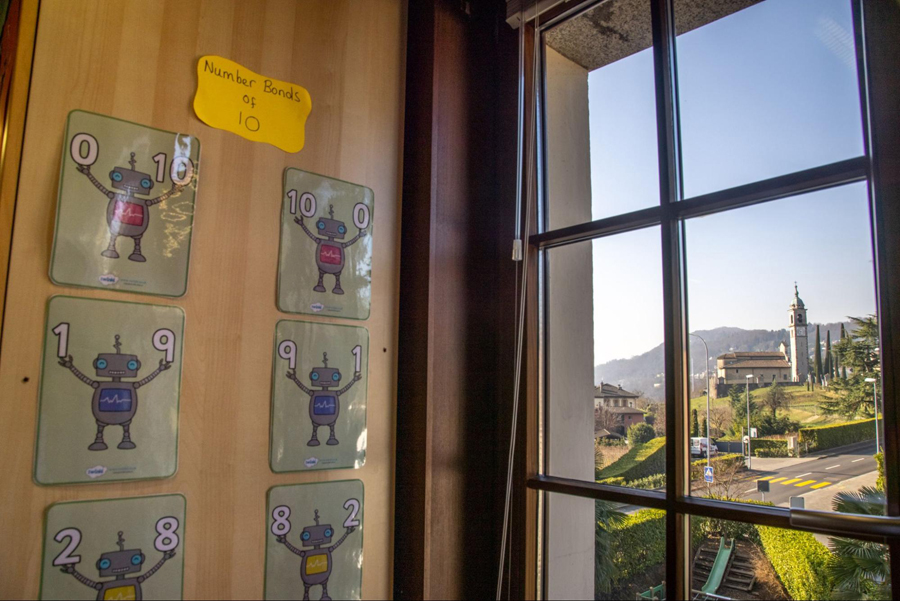 Outside the window in Ms. Alice’s classroom, students had a perfect view of La Parrocchia di Sant'Abbondio, a breathtaking church that some researchers date back to the 11th century. 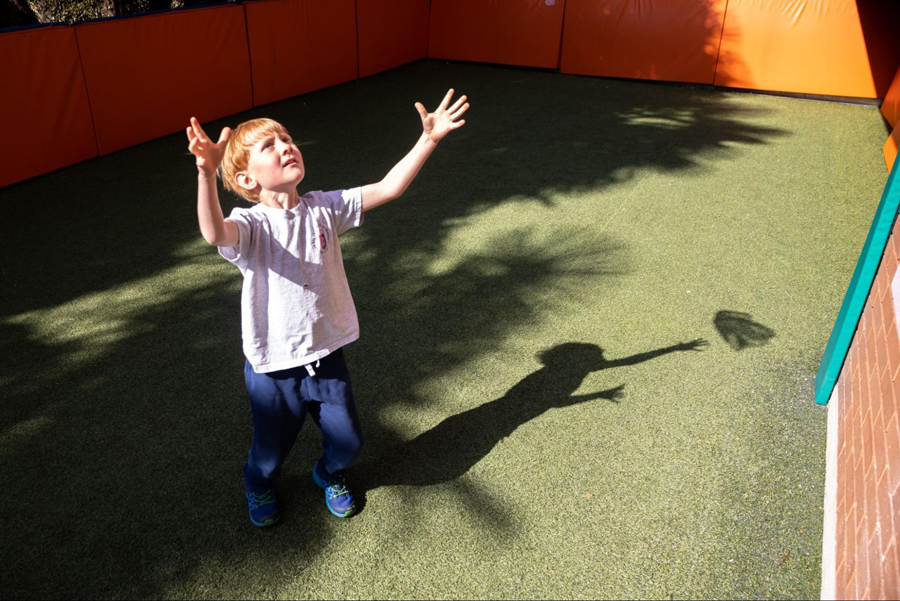 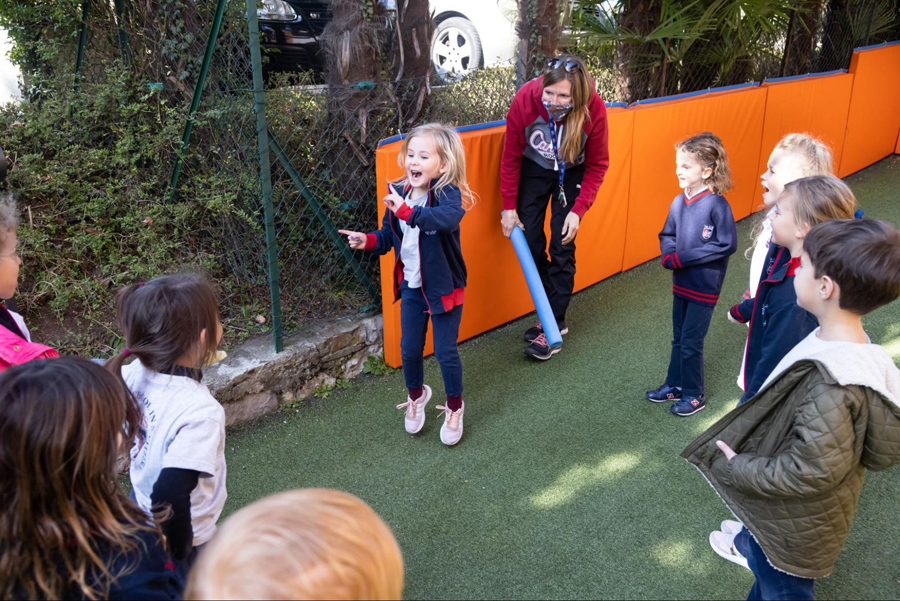 The group also had a blast playing “Statue and Animal.” Each time one student was designated an animal by Ms. Kira, the game was paused until the rest of the group could guess the animal being acted out by the student. 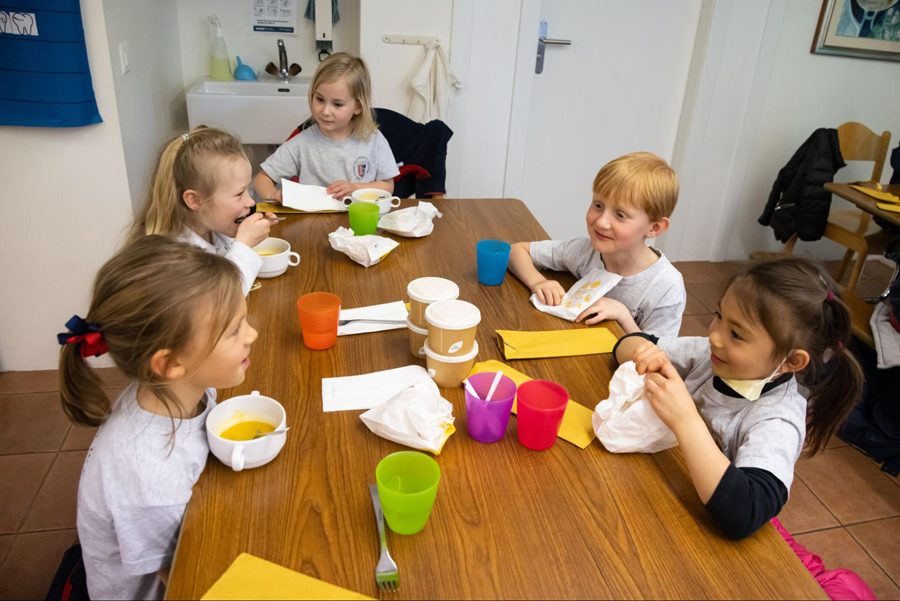 In the Al Focolare dining room, teachers and support staff serve the students multiple-course, family-style meals and teach them to use proper table manners and make their own healthy choices. On this day, the group enjoyed hot soup, fresh bread, cooked carrots, steamed potatoes, and fish for lunch. 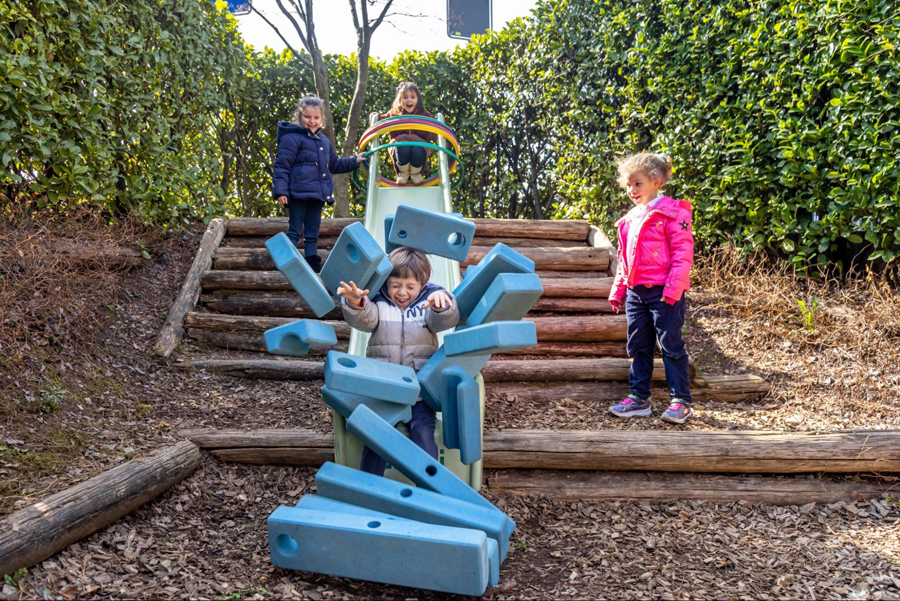 After lunch, the Kindergarteners enjoyed 30 minutes of supervised but unstructured fun on the Al Focolare playground, a well-cared-for environment that supports imaginative, social, and gross motor play. They kicked balls, played in a sandbox, rode tricycles, climbed on a jungle gym, and built walls out of foam bricks to smash through on the slide. 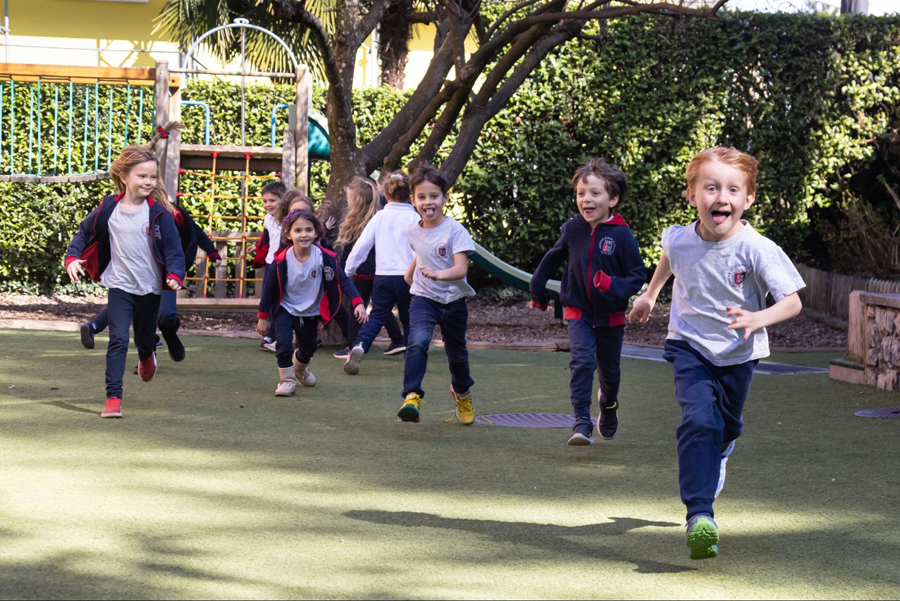 During the final minutes of recess, Ms. Alice and Ms. Liz had everyone sprint off the last of their “sillies” before heading inside for Quiet Time. 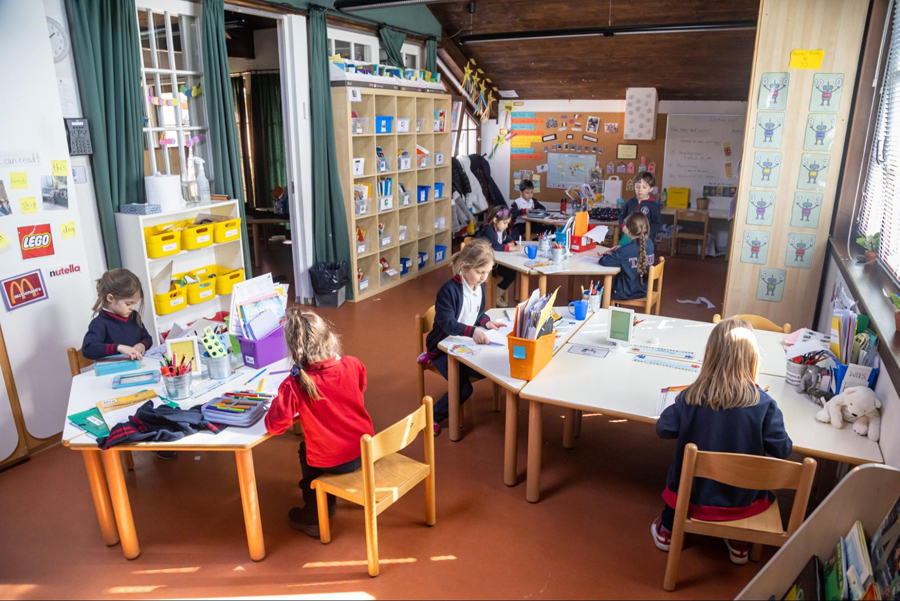 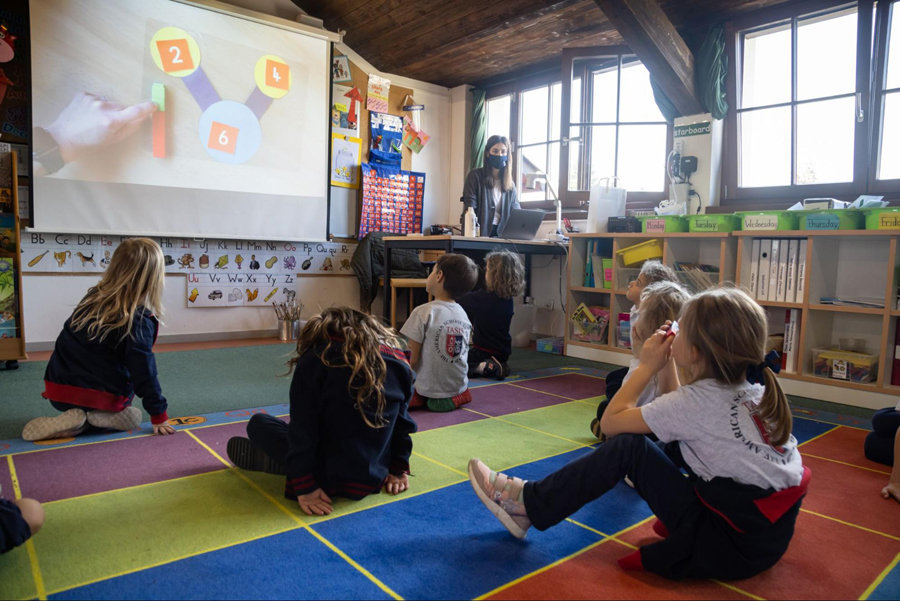 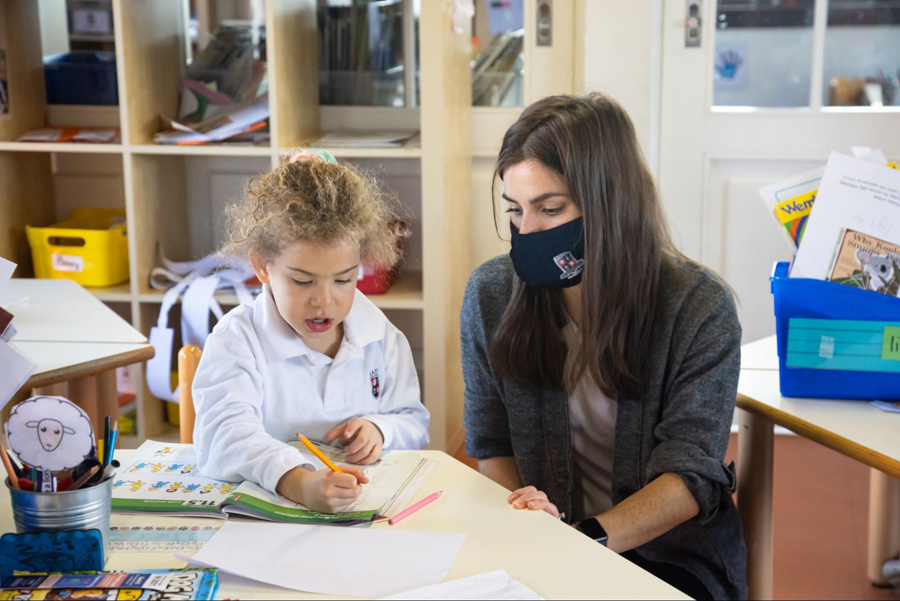 Students then moved to their desks to demonstrate their understanding in their Singapore Math Earlybird workbooks. 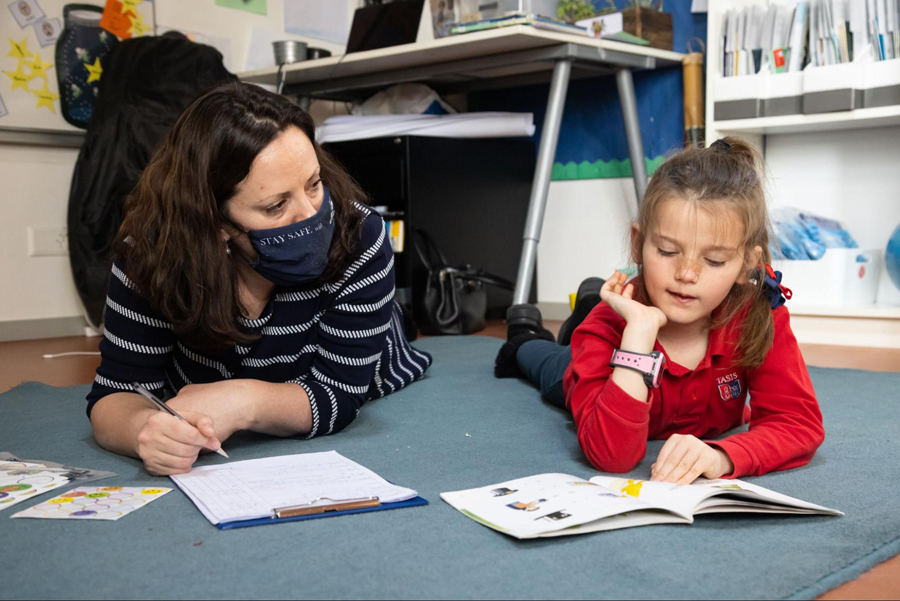 In the other Kindergarten class, Ms. Alice took turns reading one-on-one with students while the rest of the class worked independently at their desks. 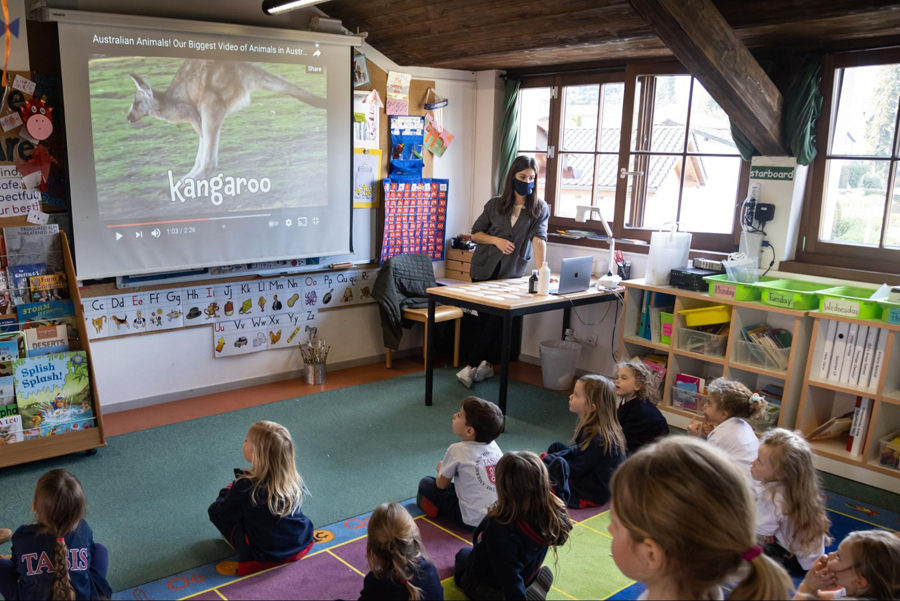 During their Core Knowledge-based History & Geography block, the combined Kindergarten classes continued their exploration of the different continents by looking at photos of Australia and watching a short video about some of the exotic animals living in the Land Down Under. 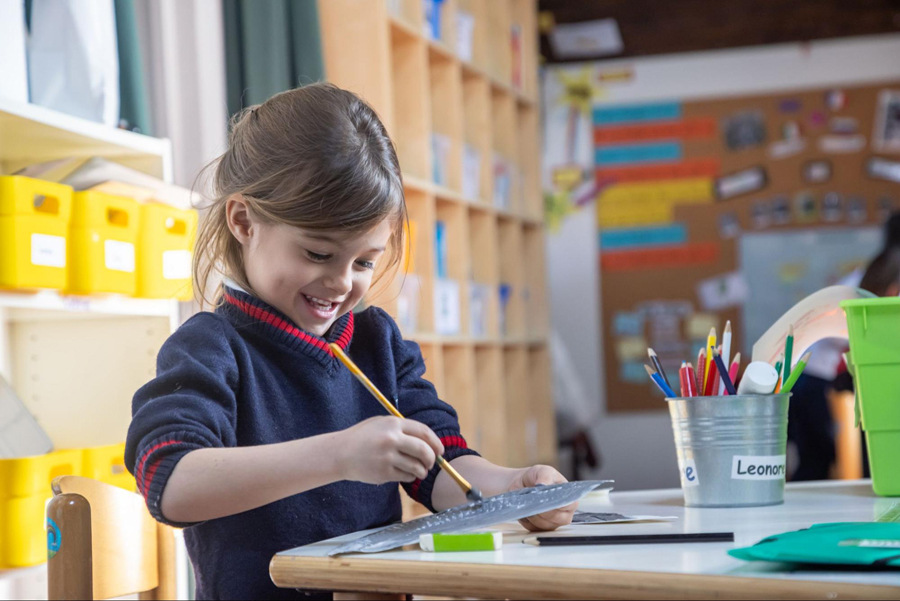 After watching a short fairy tale video about koalas, students wrapped up their last lesson of the day by painting shapes they will later turn into koalas. 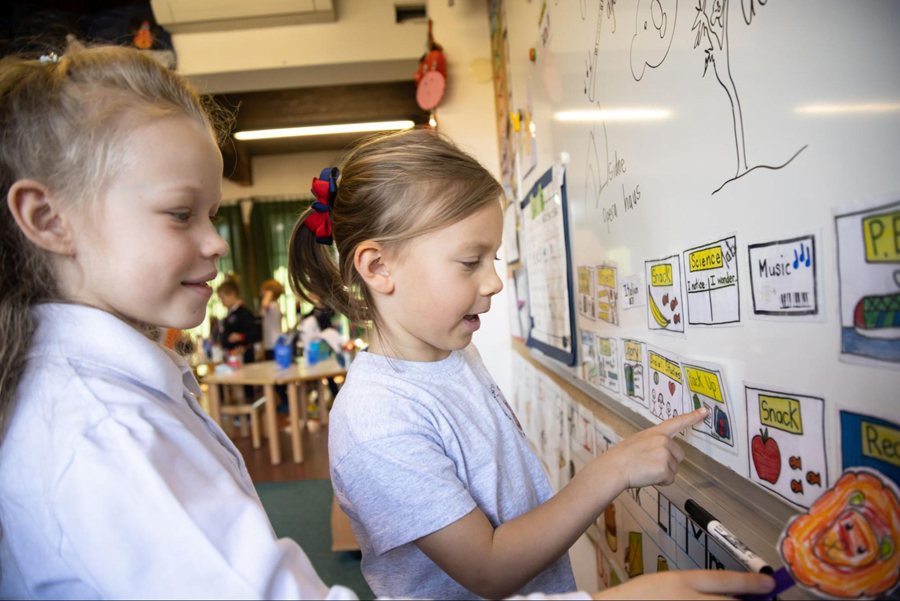 What’s next? Students packed up, grabbed a snack, and enjoyed one last recess with friends before heading home after another satisfying day at beautiful Al Focolare.