<Back to News
Ric Tac Two: A Masterful Film from Director Alex Secilmis '19 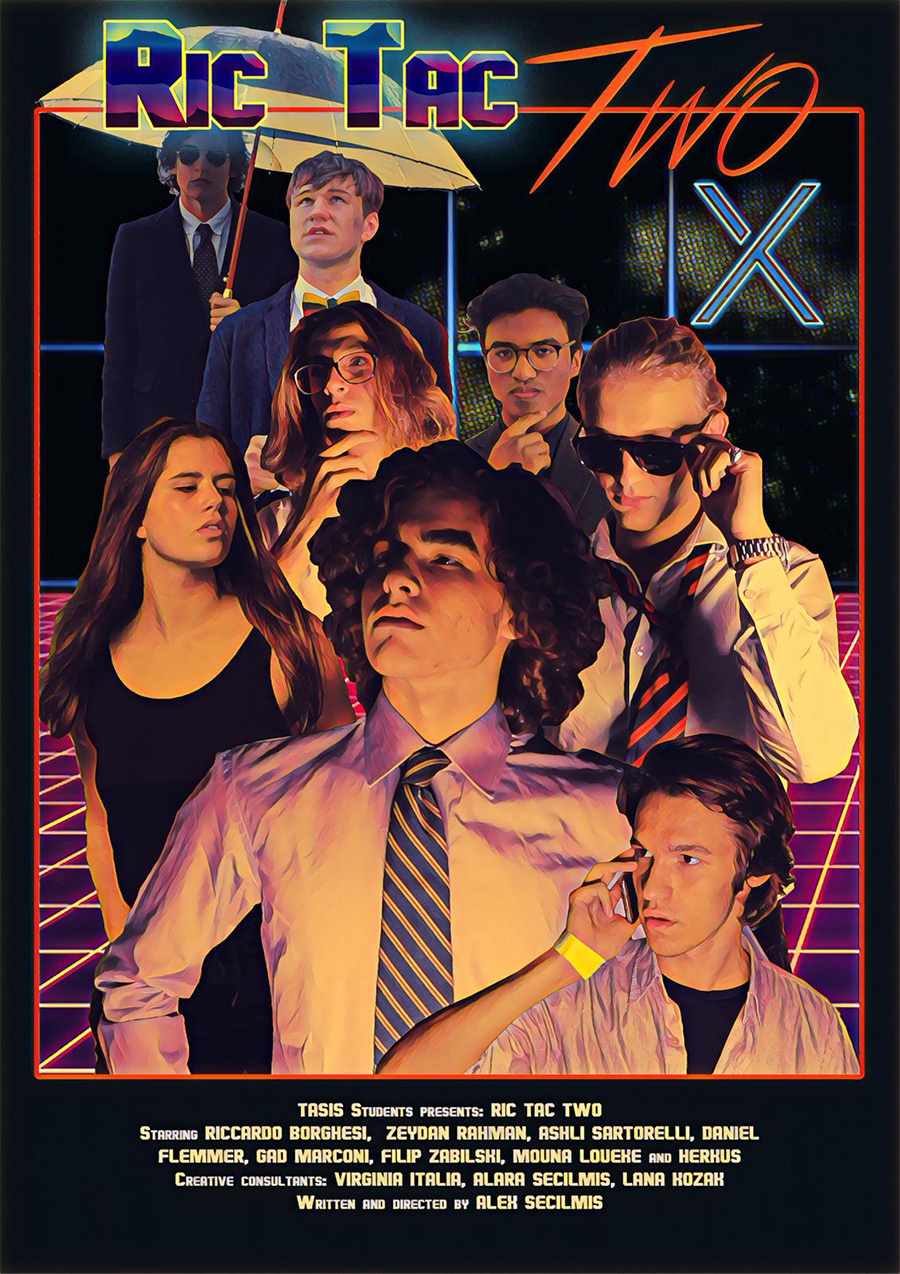 After the dramatic events of Ric Tac Toe—a 2018 mockumentary created by prolific filmmaker Alex Secilmis '19 and a dedicated group of student and faculty actors—tic-tac-toe wunderkind Richard Head has returned in the feature-length comedy Ric Tac Two, which features a deep and talented cast of 40 TASIS students and teachers.

Our protagonist is reevaluating his life and looking to make things right with his ex-wife Ashli and his estranged father Dr. Martin Head, but to do so, he has to leave tic-tac-toe behind. Ricky's quest for redemption leads him on a sprawling journey through the past and future, crossing paths with his ambitious psychologists, arch-nemesis Daniel Craig, and concerning mega-fan Herkus.

The original Ric Tac Toe film was screened as part of the 2018 TASIS Spring Arts Festival while the sequel premiered in front of a large crowd in the Palmer Center on the evening of April 11, 2019. Enjoy Ric Tac Two in full below, and read on to learn more about Alex’s remarkable achievements.

How would you describe Ric Tac Two?
My dad was asking me what’s the elevator pitch, the succinct summary for this movie, and I realized that even though it’s this ridiculous time-travel movie filled with absurd humor and 80s references, it really is a love letter to the TASIS community. It kind of started a movement, where I would have loads of people asking to be in the movie, and then there were my friends that I saw great talent in and encouraged to act. We had no professionals on this film, but our cast and crew were incredible and really the movie is designed to appeal to them, as well as the rest of the TASIS students and faculty. I’m thrilled that so many people were a part of it, and particularly for my class, this can become a relic of our time at TASIS because that identity is such an integral part of the movie, and we can now see exactly how our 18-year-old selves were.

How many total hours would you say you put into the making of Ric Tac Two? And to give people a better sense of the process, can you discuss the three major phases of production—writing, filming, and editing?
It’s really hard to pick an accurate number, but I’m guessing close to 1000. The writing process takes a while, and while I initially wrote the script over the summer, I consistently rewrote it and planned the shot list during production. In fact, I wrote the last scene just before filming it, so a week before the premiere.

Filming takes up a massive amount of time as well—to give you an idea, we shot large three-hour chunks spread out over the course of the first semester, and then a minimum of an hour a day, Monday–Friday at least, from January to April.

Finally, editing is the most grueling process. It’s where you give shape to the film, and I take a lot of extra time adjusting audio and synching the music to the action, for instance.

How did you manage to pull this off while also juggling the demands of being a second-year IB student?
With great difficulty. Many have described my decision to do so as insane, but I stand by the fact that Ric Tac Two has an importance at least commensurate to my academic achievements this year because filmmaking is what I truly love to do. I pulled it off by always prioritizing my studies. I always like to give my 100% to everything I do, so I managed by just doing everything I had to do on schedule, even though I was very pressed for time.

So the film premiered at 19:00 on April 11. When did you actually finish it?
Around 18:30 on April 11! Organizing filming is a massive hassle because I have to prioritize the schedules of my 40-some actors, many of whom are also taking the IB, so when I finally managed to wrap filming I realized I had just six days to finish editing the film. I had spent around seven months editing about 45 minutes of the movie, and I found myself having to finish the last 25 minutes in less than a week. I got through that last week by editing during literally any free time I could, probably for about eight hours a day during the last few days, and with the help of my family and friends I managed to stay sane.

What was the most difficult part of the whole process?
As I mentioned before the toughest thing is unquestionably scheduling. I wasn’t only the writer, director, cameraman, editor, and actor—I also had to organize the schedules of a great deal of people. Sometimes big problems would come from scheduling, and even though I would get really frustrated because I wanted to stick to the script, my crew and I had to come up with creative solutions. For example, Maggie was unwell one day so we just had to kill her character off extremely casually, and the biggest headache was when Herkus had forgotten that he had a hockey tournament in Lithuania, so he was out when we had to shoot the climactic concert scene. Ricky and I considered pushing the movie to May, but I thought if anybody would be a good replacement, we should get someone like Mr. Locke. The teachers in the movie are like our celebrities, so I figured it’s like if a character just suddenly became Tom Cruise and now it’s one of my favorite parts of the movie. 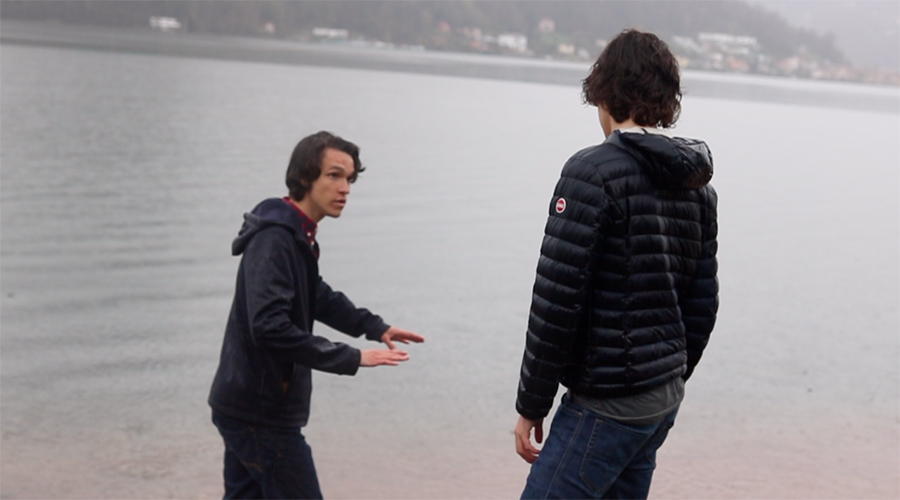 What was the most enjoyable part of the process?
Just all the laughs with my friends. Being an IB student and the constant time constraints made this movie the most stressful, but so many good moments came from just filming this absurd movie that grounded me and always made me remember that I’m doing something that I love. Things like filming the dance sequence, or the scene where Herkus eats quinoa—which we shot 23 times because our laughing ruined every shot—were all such a joy to be a part of.

What are some of the biggest lessons you learned along the way?
I learned that you can never forget that you’re doing what you love when you find yourself struggling. Filmmaking is seen as a stressful, taxing job, but I have to remember that what I’m doing is literally taking an idea I have exclusively in my mind and realizing it with the help of my friends. If make-believe is my profession, then I’m exceptionally lucky.

Another lesson, in the words of Dr. Love, is to never make the perfect the enemy of the good. Filmmaking is about compromise, and I learned that sometimes the camera can’t be perfectly stable and the audio can’t be perfectly clear, especially on a production with so little time.

How did you initially get into filmmaking?
As a kid, I had a pretty vast imagination, and seeing a great movie brought me a sort of ineffable joy that just granted me this sense of freedom. Things like Star Wars, Lord of the Rings, and Back to the Future, just to name a few, are all the most ridiculous ideas but were still brought to life. I would plan out stories a lot in my head and write books as well when I was young, and when I moved to London I started making my first movies with my best friend and my sister at the age of 10. I started with bizarre horror-comedies, parodied westerns, and spy movies, and the feeling of planning and then realizing these films provides an incredible rush of happiness and excitement.

Can you describe your growth as a filmmaker over the past three years?
When I came to TASIS in 9th grade I hadn’t ever had the chance to make films on a bigger scale. I got paired with Ricky for a PE/Health video project, and we started making these very amateur movies that were filmed on our phones. Almost by fate, when I went into 10th grade Mr. Chevalier and Mr. Zanecchia announced that they were offering a Journalism and Video Production Internship for students in grades 10–12. Their help was really incredible, and they gave me the chance to try my hand at promotional videos for the school and Wes Anderson-esque video profiles (on my friend Aurelia, for example). The support and the platform that they gave me has elevated my craft in a way I am sure no other school could have offered me.

Meanwhile, for my English class, I directed adaptations of scenes from Macbeth and Anna Karenina, and I realized that my love was rooted firmly in narrative filmmaking. I developed and brought my own style of offbeat comedy and my love of 80s music in particular even to travel videos. By 11th grade I was already much more careful with the technical side and not just the narrative, and I think that making a one-hour movie is the culmination of an amazing journey with so many wonderful people that have helped me along the way.

What’s next for you as a filmmaker?
I want to just keep on making movies. I know that it’s a tough business to break into, but honestly I am already living the dream and making feature-length films and just want to continue that. I frequently find myself less interested in movies that come out today, and I feel that particularly with the transition to digital there’s a sort of demand for realism, social relevance and an excess in content to the point where I want to go back to the more grainy, overtly cinematic aesthetic of movies from the 80s to the early 2000s. I think we need more films that own the fact that they are unabashed fantasy—even something like Ric Tac Two owns its absurdity, and I want to make more of those sort of movies.

In chronological order, here are the original films Alex Secilmis has produced over the course of his four years at TASIS: