TASIS Re-Accredited by CIS and NEASC

The TASIS “Mo Bros” have now produced seven music videos and raised more than CHF 10,000 for the Movember Foundation, a global charity committed to men living happier, healthier, and longer lives. The Foundation started in Australia with 30 members in 2003 and has since grown to a community of five million that has now raised more than $600 million for pressing men’s health issues, including prostate cancer, testicular cancer, and poor mental health.

Watch the brilliant 2019 video above, discover how Opsahl Global Service Program Director Danny Schiff brought the Movember movement to TASIS in this article, and read on to learn why so many TASIS faculty members participate in Movember year in and year out.

Members of the High School Student Council interviewed a range of faculty members to learn why they support the Movember cause. 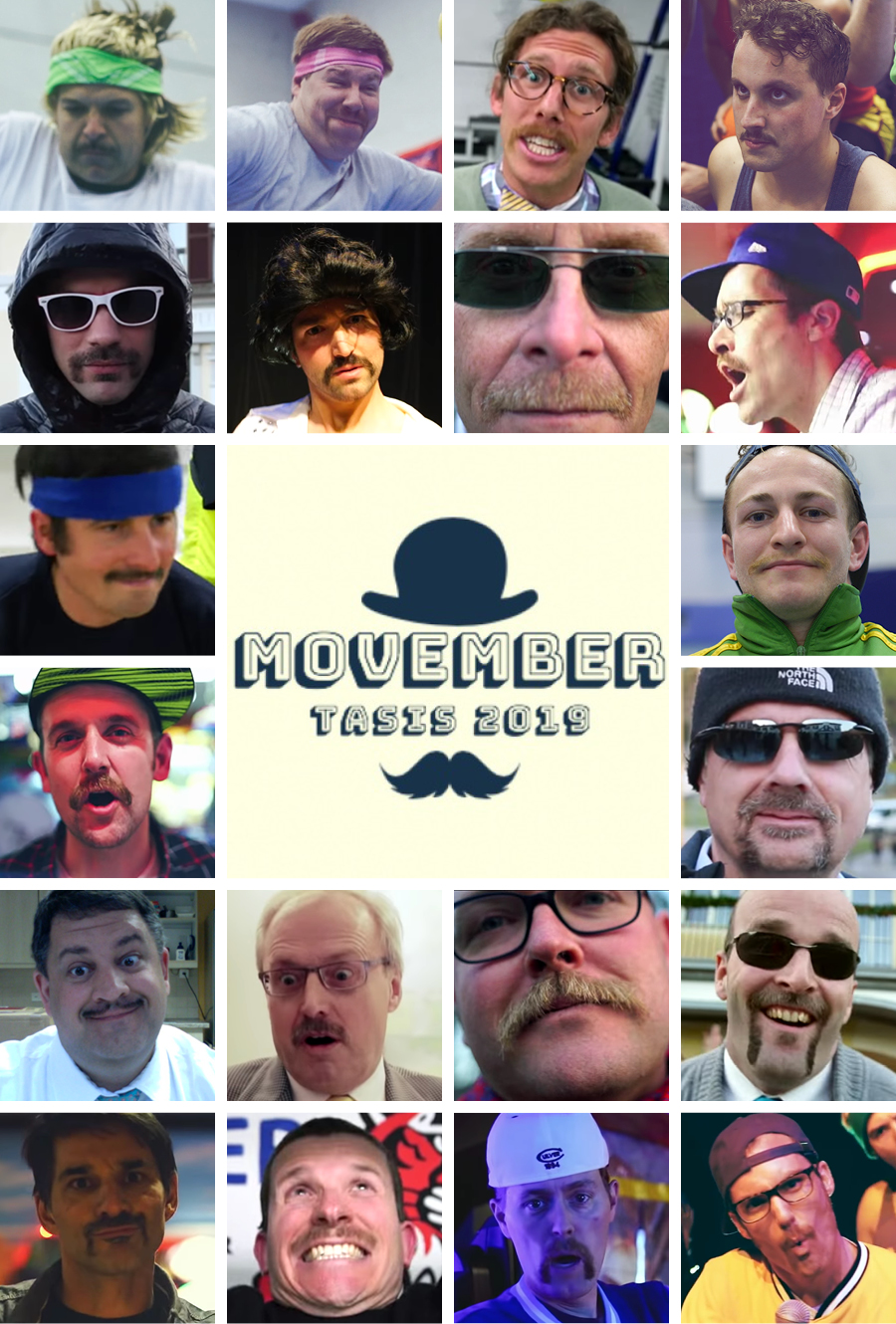 What would you like our TASIS community to know about Movember?
Mr. Schiff (a.k.a. D$chizzle) is the main Mo. Without him, we wouldn't have this amazing community effort and creative outlet during such a busy and often gray time of year. That said, it takes a lot of work from all the Mo Bros and Sistas to make this happen every year, so props to everyone for giving up their time and contributing their talents!

What does Movember mean to you, and why is it important?
We don't often take time to think about mental health issues that many people are facing. It seems men are very good at hiding their feelings and struggles, so bringing awareness to these issues could give men the permission they may be seeking to open up and get help. The struggle is real but not impossible to overcome.

Director of Residential Life and Chair of the Physical Education Department

What does Movember mean to you?
I know it’s typically about men's health and prostate cancer, but for me it’s more about bringing awareness to all types of cancer. My mother had breast cancer, so it’s very close to me and I’m very supportive of this movement. I find that every year it brings us together as a faculty in a fun way, and it’s nice to be part of it.

Why do you think it is important to acknowledge?

There is a bit of a taboo in the world where men think they don't have to see a doctor—they just suck it up. But the reality is that they do, and everyone needs to do check-ups for prostate cancer. I like Movember because it's over the course of a full month. We are very busy at TASIS, so it’s easy for people to quickly move on after a one-day event, but Movember is different. So when you see a caterpillar on their faces it makes you think. It’s a constant reminder.

How did you learn about Movember?
I learned about Movember through that boy D$chizzle [stage name of the original Mo Bro, Danny Schiff].

How long have you been participating in Movember?
This is the fifth November I have chosen to upgrade my face with a gorgeous, Burt Reynolds-meets-Hulk Hogan masterpiece.

Why are you participating in Movember?
Movember provides a playful arena in which we can raise cancer awareness and promote a healthy lifestyle. Also, mustaches are awesome, and they were awesome well before being discovered by hipsters and Chris Evans.

What would you like our TASIS community to know about Movember?
I know it's been a challenging month for everyone with all of these mustaches sneering their way around campus, but I promise it's for a good cause. Check out movember.com, and consider donating to support cancer-related research and mental health.

How did you learn about Movember?
Movember has been happening in the UK for many years, so I was familiar with it well before I came to TASIS in 2018.

How long have you participated in Movember?
I did it last year—my first year at TASIS—but I did not grow a mustache this year. I have also done it before at other schools.

What does Movember mean to you, and why is it important?
It’s important because it raises the profile of cancer in men, so that’s the first thing, which is quite important because men turn to hide it when things are wrong. And then there is the charitable aspect—it’s a good thing to be doing.

How did you learn about Movember?
Back in Wisconsin, my friend Dave Thorp was a huge Movember supporter and would raise thousands of dollars for the cause. That’s how I first learned about it.

Why are you participating in Movember?
It is a good cause for raising cancer awareness in general. People are living longer lives these days, which creates more chances for them to be affected by cancer. It is hard not to want to raise awareness about this.

What would you like our TASIS community to know about Movember?
Mr. Schiff just takes it and runs with it. He supports the cause through Global Service groups and silly videos that are creative and at the same time impressive because it makes the case that we can have a laugh even as we try to help people.

How did you learn about Movember?
From Mr. Schiff and the Youtube videos, which are hilarious.

How long have you participated in Movember?
This year is the first one.

Why are you participating in Movember?
It seems like a good way to have fun while raising awareness. (And you can become YouTube famous.)

What would you like our TASIS community to know about Movember?

Mustaches are not for the faint of heart.

How did you learn about Movember?
I would say just by looking at Instagram and seeing lots of people doing it—like rugby players, for example.

How long have you participated in Movember?
This is my second time participating.

What would you like our TASIS community to know about Movember?
Just that it is not only about raising awareness for cancer, but also for suicide and mental health issues men face.

Director of University and College Counseling

How long have you participated in Movember?
I was part of the first TASIS group that did it and have been participating every year since.

What would you like our TASIS community to know about Movember?
Well, a couple of things. It’s about raising awareness for prostate cancer and other men’s health issues and about trying to raise funds for researchers searching for a cure for cancer. Most of us have known people that have died from cancer.

What does Movember mean to you and why is it important?
I haven’t had any direct family members who have died from prostate cancer, but I’ve had friends, so obviously that’s something that affects you. In terms of TASIS, it’s a tradition now—it’s something Mr. Schiff has done a great job organizing every year, and we do a video, so it’s something I look forward to. I don’t look forward to this [pointing at mustache] so much, and Mrs. Birk certainly doesn’t look forward to this month, but again, I think it’s a worthwhile cause. I enjoy the camaraderie that I get out of doing something with my colleagues, and then being in the video certainly stretches me a little bit—that’s not my thing, but I do it.

How did you learn about Movember?
I first learned about Movember from Mr. Schiff in 2013. He was a driving force to get many faculty members behind this cause. It was also the first year of the TASIS Movember videos.

Why have you participated in Movember?
I have lost some family members to cancer, and I feel it is important to help raise money for research to fight cancer. It is hard when you lose your grandma, grandpa, aunt, or uncle to cancer. Hopefully, our donations can be effective as researchers continue to search for a cure.

How did you learn about Movember?
I was back in Canada when the movement first started taking shape, and I took notice of it.

How long have you participated in Movember?
I haven’t participated because I grow a very lousy mustache. I tried, but I was embarrassed. But my son participates!

What would you like our TASIS community to know about Movember?
Well, that the money raised goes toward a good cause. I do contribute some money, so regardless of the fact that I don’t grow a mustache, I consider myself a supporter of the movement.

What does Movember mean to you, and why is it important?
Well, you know, I think being aware of the issues that other men face, which in many cases are different from the ones that women face, creates an awareness for men to raise money toward causes that affect many men. And so I support the cause and try to contribute to it in my own way—just not by growing a mustache.

The Evolution of TASIS Movember Videos

All videos other than 2017 were primarily filmed and edited by Milo Zanecchia ’08, and Alex Zanecchia ’02 handled the sound engineering on all but 2013. Many other TASIS Mo Bros and Mo Sistas have contributed their acting, dancing, choreographing, singing, and editing skills along the way.