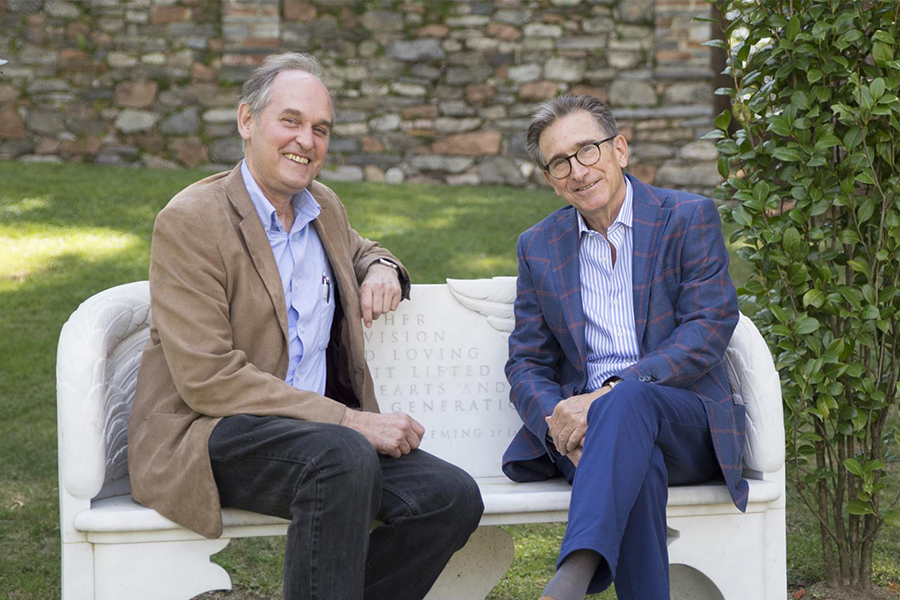 TASIS has always been an exciting place, and in its early years under Mrs. Fleming perhaps something of a three-ring circus, with lots of variables and comparatively few constants. The original pioneer-founder herself, MCF used to ask teachers in a talk at the faculty banquet at the outset of each year, "Will you be a TASIS person?" She probably meant in those early days whether the individual teachers would have the adaptability, energy, and multitude of skills and competencies necessary to thrive at TASIS and serve the School's missionâor develop them. Among the challenges in those days and since were the number of variables in the dynamic life of the School: different languages, different nationalities, different curricula, different academic-year and summer programs, and different talents necessary for teaching, coaching, tour-guiding, residential life, extra-curricular activities, and administrative responsibilities.

Some people burned out at TASIS, and departed, but others thrived and stayed, and among the longest-serving "TASIS people" have been Bill Eichner and David Jepson, both of whom have been recently promoted to important new positions, Bill as Director of Institutional Advancement at TASIS and David as Director of Studies for both TASIS and TASIS England. Both men have extensive experience in TASIS schools, going back in each case a third of a century. Both worked closely with longtime Headmaster Lyle Rigg for decades; indeed, both Lyle and David started their TASIS careers at TASIS England in 1979, and Lyle hired Bill in 1983. Bill Eichner was educated at Ohio University and Syracuse University, including the Florence Fellowship at the Syracuse University Program in Florence, where he did an M.A. in Art History. He also completed an M.A. in Teaching and Curriculum with Michigan State University. He started out at the American School of Florence, and subsequently he and his wife Melissa have served in various capacities at TASIS schools in Cyprus and France as well as Montagnola: Bill taught Art History, served with Melissa in residence, was Academic Dean for a decade and subsequently Director of Admissions for many years, becoming not only a professional collaborator with Mrs. Fleming and her daughter Lynn Fleming Aeschliman but also a close personal friend and adviser. Having recruited Emily McKee to work with him in Admissions, Bill has been gratified at her and her husband's contribution to TASIS, and Emily now takes Bill's old title as Director of Admissions. His new title "Director of Institutional Advancement" gives formal recognition to the fact that for many years Bill and his wife Melissa have been increasingly important "constants" in the whirling TASIS world of exciting but sometimes disconcerting variables, innovations, growth, and change. Chairman of the Board Lynn Aeschliman has increasingly felt the need for Bill's indispensable role at TASIS to be recognized by the School community, students, parents, and alumni. As Director of Admissions Bill presided over an enormous increase in the enrollment of the School, including the success of the elementary school and the accompanying growth of the day-student population. Bill's and Melissa's son James '07 is a TASIS alumnus. David Jepson served most of his TASIS career at TASIS England, to which he returns now as Director of Studies for both schools, resident there but visiting Montagnola on a twice-monthly basis. David was educated at Wheaton College (Illinois), the University of London, Boston College, and the Harvard Graduate School of Education, and he has taught English, Latin, philosophy, and computer programming in both schools. He was one of the key figures on the TASIS England faculty and staff, serving as Academic Dean and Head of the Upper School as well as chief publications writer for both TASIS schools and Director, with TASIS veteran theater director Kay Hamblin, of the "ShakespeareXperience" summer program at TASIS England. David returned to TASIS England twice from high-ranking administrative positions at schools in the US, in upstate New York and in San Francisco, proving himself to be a true "TASIS person." Recruited anew by Interim Headmaster and old friend and colleague Lyle Rigg to help him in his recent two-year tenure as TASIS Headmaster, 2015â2017, David profoundly helped focus and coordinate the School's academic efforts, also serving as both a senior colleague and model for younger TASIS administrators and teachers. Along with Lyle's assembly speeches, David's regular written essays on educational issues for faculty have given guidance and inspiration, as well as knowledge of the TASIS aims and ethos that he and Lyle have done so much to make realities in their intertwined professional lives and careers. Two of David's children attended TASIS England, both going on to study at Harvard after graduation. (Read David's perceptive and eloquent reflections on education and TASIS.)

TASIS Board Chairman Lynn Aeschliman has felt increasingly the need to insure that the impetus, trajectory, and momentum of the TASIS approach to education, developed also by the unique personalities, styles, and contributions of the people who have most sympathized and helped to shape it with their unique contributions, will not be lost. "Around and around the world is whirled, / And perhaps because she is so whirled she is so called," and the excitement of liberty and innovation, the newness of the world to every new student and teacher, and to every new generation, is part of the beauty of the world, perhaps especially of the world of TASIS. But an educational institution also needs steady direction, ballast for the long sail in shifting seas, and clear-eyed, far-seeing officers and educators who know the longer-term values, virtues, and accomplishments that good schools should serve: constants, not just variables. Mrs. Fleming liked to quote the saying, "Times change; values don't," and along with their many competent colleagues of dedicated goodwill, Bill Eichner and David Jepson will help to assure that the TASIS schools survive and prosper as instruments of the good and the true.