TASIS Elementary School to Host Open House on February 6
<Back to News
International Week Confirms that Mrs. Fleming's Vision is Alive and Well

“I want to believe as I age that the dynamic of TASIS will go on forever—that it will continue to bring young people of the world together with a shared vision that the world is really one big family, that no matter what our color, race, or creed, we are all part of of the human species, we are all human beings. All we need to bring us together is education, education to give us freedom from poverty, disease, and war. It sounds like a tall order but through education it can be achieved, and TASIS must take the lead.”

– TASIS Founder M. Crist Fleming in a 2001 letter to alumni

International Week is always one of the highlights of the year at The American School in Switzerland, and the School kicked off the 2017 edition on the morning of February 13 with a stirring Opening Ceremony that included remarks from Headmaster Lyle Rigg, a spirited Parade of Flags, the presentation of Torch Awards, and an excellent performance from the combined school choirs and the TASIS cheerleaders.

Mr. Rigg opened the ceremony with an inspiring speech (full transcript here) that highlighted the impressive internationalism of TASIS. He urged students to remember that while it is perfectly acceptable to express pride in one’s country, “The most important thing that happens here today is that we celebrate the fact that we are one community. At TASIS we work hard to emphasize the things that unite us.”

Mr. Rigg then turned the podium over to Zere Turlykhanova ’17 and Jane Wilson ’22, who introduced the flag bearers from 59 different nations. Each flag was carried, whenever possible, by the youngest and oldest TASIS student (as well as a Middle School student) from that nation.

Performances from the Opening Ceremony

After four days of exciting play in the Palestra, it took an extra round of penalty kicks for a surprising USSR* squad to outlast RIR and emerge as the 2017 High School World Cup champions.

Both teams reached the final after surviving penalty shootouts in the semifinals. After lumbering to a mark of 2-2-2 in round-robin play, USSR bested the very talented Latinos after each team found the back of the net once in regulation. RIR carried a record of 4-2 in semifinal play and then outlasted Italia in a shootout after two scoreless halves. Both wins could be considered upsets, as the Latinos entered the round of four with an unblemished record of 6-0 (outscoring opponents 18-2) and Italia came in at 4-1-1.

Mauricio Talayero ’18 of Latinos won the Golden Boot Award for dominating the tournament with 11 goals while no other player tallied more than four. Teammate Gabriel Valente ’18 took home the Golden Glove Award for his outstanding work in net.

Fiona Perdomo ’17 electrified the crowd when she struck from nearly 100 feet out for Hawaii, becoming the first female player to score in a TASIS High School World Cup. She was named Most Inspirational Player.

* Students chose the names for their teams, which were loosely based on regional ties. The seven teams competing in this year’s World Cup were Hawaii, Italia, Kiribati, Latinos, RIR, Turkey, and USSR.

Alex Secilmis ’19 did a remarkable job capturing the excitement of this year’s tournament. 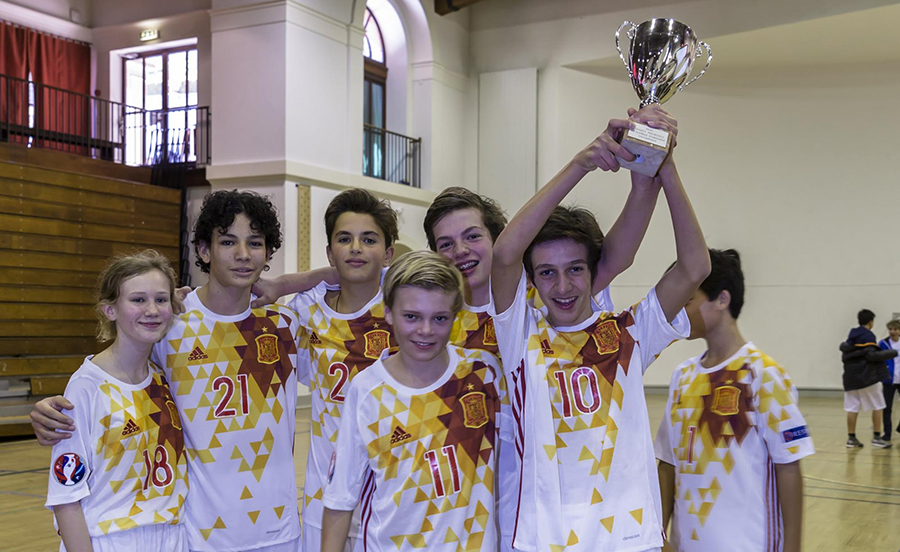 Spilled Spaghetti was crowned champion after a Middle School World Cup that historians are calling the most exciting and action-packed in School history.

Spirited play and excellent goalkeeping produced two closely contested semifinals, each of which remained scoreless in regulation time. In the end, Europe and Spilled Spaghetti advanced over FC Belvedere and Scandita via penalty shootouts.

When Europe advanced to the final, it was the first time in six years that a primarily female team (with a male goalkeeper) contended for the championship—a testament to how far the Middle School girls soccer program has come. Europe also did not concede a single goal in regulation time throughout the tournament, and only through yet another penalty shootout did Spilled Spaghetti hoist the trophy in the end.

The Poverty Awareness Service Learning group congratulates the winning team and gives thanks to the players, coaches, fans, teachers, and parents who supported the tournament and their fundraising activities.

A colorful week on campus

One of the parts of International Week that everyone looks forward to is the opportunity to eat delicious food from all over the world. Each lunch and dinner served on campus throughout the week had a different national theme, and a huge variety of cuisines were offered at the High School International Food Fair, the Middle School International Breakfast, and the Elementary School Potluck Dinner.

See a gallery of photos highlighting the food and costumes on campus throughout the week.

Tennessee Hildebrand ’17 highlights some of the traditional costumes worn by students.

At the Elementary School International Showcase in the Palmer Center on Friday morning, students performed songs, instrumental solos, dances, and short skits representative of their home countries. Their varied and impressive talents were on display for nearly an hour and can be viewed in the clip below.

The 2017 ES International Showcase (see a gallery of photos here)

The Middle School International Assembly on Wednesday morning featured international-themed presentations and performances. See highlights in the clip below.

Closing out a great week

The High School’s closing assembly helped give perspective to another terrific International Week. Athletic Director Sonny Kim’s presented the World Cup Awards; students and faculty members read a series of inspiring quotes promoting international understanding; IB Theater students Georgia Mantegazza ’17, John Gage ’17, and Ivan Semashev ’18 spoke about Mrs. Fleming’s legacy and the opportunity the week affords us to celebrate both our own heritages and those of our entire community of friends, families, classmates, and colleagues (a condensed version of a presentation they gave to the entire ninth grade earlier in the week); and Eliana Hill ’18 beautifully sang Andra Day’s “Rise Up.”

It was a moving way to close out the week, and it was easy to see that Mrs. Fleming has indeed created “not international schools but international human beings.”

Nations represented in the 2017 Parade of Flags