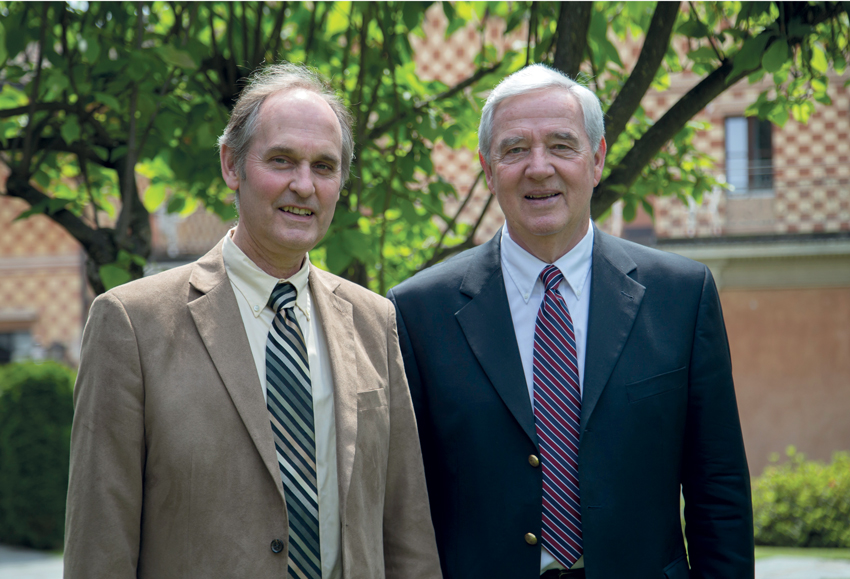 Leadership — that is what education is all about…I mean the kind of leader who subtly and visibly affects the lives of all around them and makes a better person of those whose lives they touch. A role model, yet so much more, because of that certain something they give off — that sense of life as an exciting and wonderful thing!

TASIS welcomed two veteran leaders to Lugano in August, both of whom not only possess what Mrs. Fleming refers to above, but have also had a profound effect on her schools.

Lyle Rigg began his TASIS career in 1979 as Assistant Headmaster at then three-year-old TASIS England. In 1982 he moved to Lugano and served as Headmaster for two years before returning to TASIS England in 1984 to serve as Headmaster until 1998. He left to lead the Pennington School in New Jersey from 1998 until his retirement in 2006.

Lyle’s definition of ‘retirement’ is different to most. A year later, he returned to Lugano to serve as interim headmaster until 2008, then to England to serve as interim headmaster from 2009-2010. He is now serving a two-year term as Headmaster of TASIS Lugano. “Recently, when I told an Italian-speaking friend that I was returning to TASIS for a third time she said, non c’e due senza tre, [‘there are never two without three’],” he says. “Rather curious. Was I destined to return to both schools for a third time after I had returned for a second?”

David Jepson also began his TASIS career in England in 1979. Over the years he served as Academic Dean, Assistant Director of Development, Director of IT, Head of Upper School, and then finally Director of Technology and Learning. He left TASIS England to take posts in the US on two occasions but always returned to TASIS England, serving a total of 31 years. Throughout his TASIS tenure he visited Lugano many times, working on a variety of projects. This is, however, the first time he’s lived in Lugano full-time.

David is especially enjoying the proximity to Italy. “I am hoping to find the time to explore Italian culture as much as possible,” he says. “A place to start is the Italian language, which I don’t yet know very well, so one of my personal goals is to make as much progress in learning Italian as I can.”

Lyle and his wife, the award-winning children’s author Sharon Creech, are delighted to be back where they spent the first two years of their married life. “We look forward to reconnecting with many friends,” Lyle says. “And there is gelato at Sara Li’s and pizza at both Bellavista and Mary’s. We also look forward to Swiss trains and strolling along the lake promenade in Lugano. And who knows, perhaps Sharon will be inspired to write a third book set in Montagnola!” Of course: non c’e due senza tre.

After nearly four decades as friends and colleagues, Lyle and David are relishing the chance to work together again. “David is an outstanding professional educator and leader; intelligent, articulate, flexible, kind, personable, and extremely talented in many different ways,” Lyle says. “Although I was reluctant to ‘borrow’ David from TASIS England, and leave a big hole for them to fill, I also was eager to attract him to Lugano and work with him again.”

David has equal praise for Lyle. “I have sometimes introduced into my speeches in praise of Mrs. Fleming the quote from Dostoyevsky, ‘Beauty will save the world.’ I am sure that’s right — but beauty cannot do it alone; it needs a little help from its friends: humor, loyalty, friendship, compassion, and understanding,” David says. “These are the values that Lyle has contributed to our community over the years, and like beauty, they are qualities that will stand the test of time.”

For Lyle, Mrs. Fleming’s spirit is very much alive on her campuses. “It’s like she is watching over us, making certain that we continue to honor her vision. And it’s a very nice, reassuring feeling for me,” he says. “TASIS has been such a big part of my life because I believe strongly in Mrs. Fleming’s vision, a vision that is carried on by so many. One of my major goals as headmaster is to ensure that we continue to stress and highlight the things that were so important to Mrs. Fleming: beauty, the development of good character, academic excellence, service, civility, good manners, the arts, compassion, and respect, just to name a few.”

Their shared history means they are best placed to introduce a new generation of students to Mrs. Fleming. As Lyle says, “Because many of our students and teachers have not had the pleasure of knowing Mrs. Fleming, I look forward to finding ways to tell them about this remarkable woman so that she might come to life for them, too.”