Alumni Notes: October 2020
<Back to News
Virtue, Knowledge, and Poetry

Fatti non foste a viver come bruti, ma per seguir virtute e canoscenza.
You were not made to live like brutes or beasts, but to pursue virtue and knowledge.

Florence. The Platonic ideal of a city; Dante’s motherland; a vibrant nest of history, art, and beauty.

During the last week of October, our Honors World Literature class had the unique opportunity to take an Academic Travel trip to Florence to learn about Dante, further our knowledge of his work, and bond as a group while touring this magical city under the guidance of Dr. Love and our chaperones, Mr. Federico and Ms. Yount. 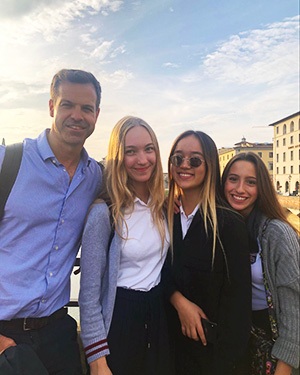 It all began with a three-hour train ride bursting with Dante discussions, endless conversation, and uncontrollable exhilaration for the trip ahead of us—without earwigs, of course! (Dr. Love’s name for headphones or AirPods is “earwigs,” and wearing them in moments when we could be productively discussing Dante is strictly forbidden!)

At 1 PM, the exploration began.

After checking into our hotel, we embarked on our very first adventure—a poetry recital around Florence, from the Duomo to the Ponte Vecchio to Piazza San Lorenzo. Each pair of students got to recite six lines from Canto VII of the Inferno in their own location. I was lucky enough to recite my lines next to (the marble version of) Dante himself!

We managed to see and, most importantly, feel the spirit of the city through a handful of its beautiful and fascinating highlights, all condensed into an impression of immediately noticeable, yet strangely subtle, grandeur. Florence is so charged with those who came before us, so imposing with its architecture and inherent beauty, that it makes you feel like for a week, you become a part of a huge, yet compact, sea of grace.

Following our recital, we had some time to tour the city on our own. We visited artisanal shops, walked the signature Florentine streets, and then went to dinner as a group in the Osteria Santo Spirito. In between our tours, we had a few priceless moments to get postcards for our loved ones and try Florentine gelato—a definite must. 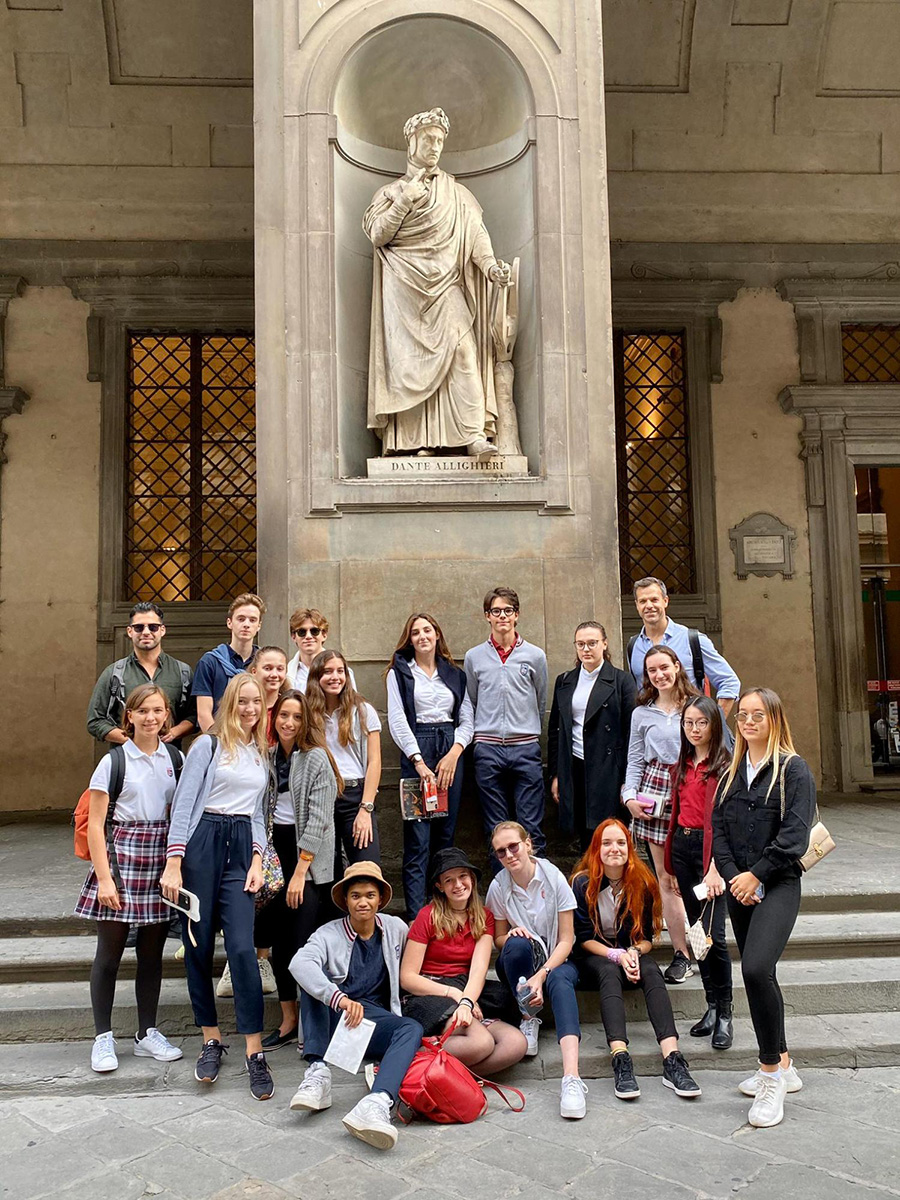 Where I recited my six lines from Canto VII 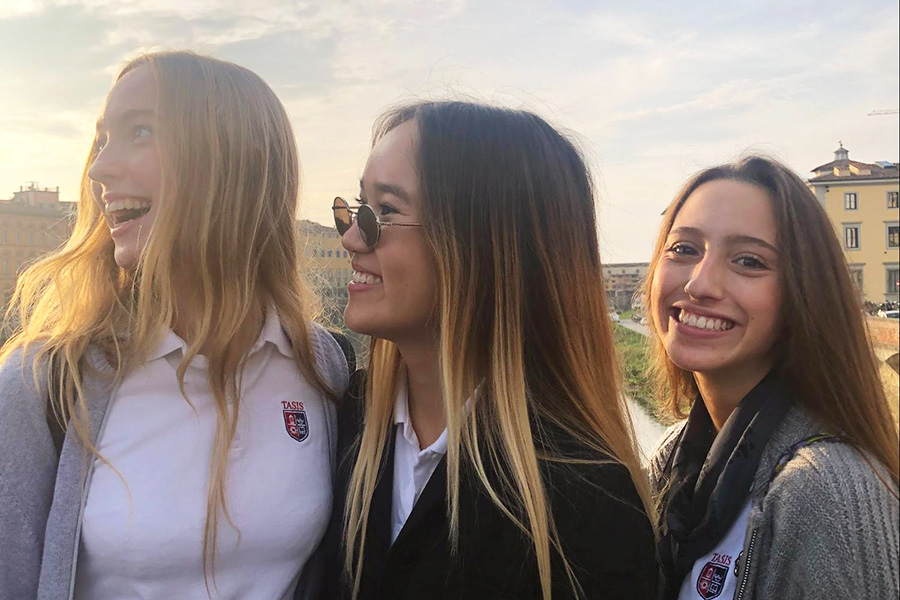 "Open your mind to what I shall disclose, and hold it fast within you; he who hears, but does not hold what he has heard, learns nothing." (Paradise, Canto V, lines 40-42)

After a great morning with my roommates, we set off on another day in Dante’s city.

First, we visited the one and only Santa Croce Cathedral, built in the Italian Gothic style, which holds the tombs of Michelangelo, Ugo Foscolo, and Galileo. Dr. Love reminded us, however, that “one of the most important reasons to visit Santa Croce is not to note who is here, but to note who is not here.” (Dante was exiled from Florence in 1300, and his body is buried elsewhere.)

Florence’s reverence for Italy’s greatest poet echoes throughout the Cathedral. The famous statue of Dante by Enrico Pazzi, erected in 1865 for the 600th anniversary of Dante’s birth, and the large and beautiful monument built for him inside the church signal the regret of Florence for having exiled such a vital part of its culture. Dante is portrayed sitting next to the Muse of the Arts—the city’s way of giving Dante an everlasting and pure form of fame, rather than earthly, fleeting flattery.

In Santa Croce, we learned about two of Dante’s most esteemed artists, Giotto and Cimabue. Dante’s goal, like that of the artists, was modernizing poetry not for the sake of modernization, but for the sake of art itself. Then, we explored Dante’s house and read about crucial parts of his life—from his love for Beatrice to his hatred for Pope Boniface VIII, to the historic Battle of Montaperti.

We had Florentine sandwiches for lunch and soon moved on to a less conventional tour of Florence. One of my favorite parts about this trip was, in fact, how unpredictable and yet how relevant it was —every stone and every street has its own resonance in the life of Dante and in the history of poetry and art. We learned about the public massacres in Florence between the Guelphs and Ghibellines and about how Dante’s work saved the souls of poets like Henry Wadsworth Longfellow.

That afternoon, we visited the beautiful Dominican Cathedral of Santa Maria Novella, along with its magnificent botanical gardens.

We had our very first Modern Adaptation workshop, one of the highlights of the trip, in our favorite Florentine cafe, La Cite, during which Dr. Love offered wonderful advice on our upcoming project; each student adapts a certain canto from the Inferno into the modern world while focusing on their own home country.

Our day ended with a delicious dinner and an evening ride on the city’s carousel, in which everyone, including Dr. Love, participated! 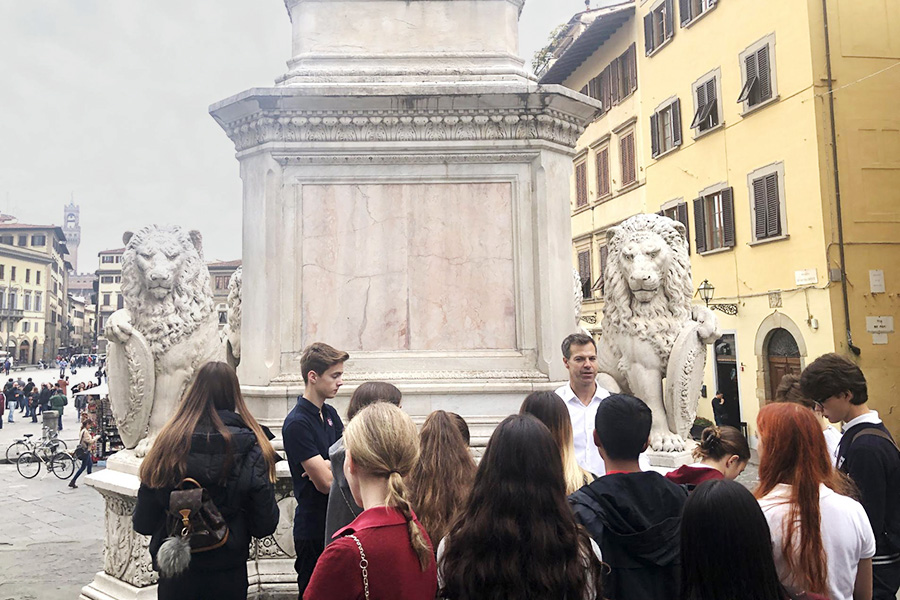 Next to Enrico Pazzi’s statue of Dante and next to Dante’s house, with Dr. Love teaching and leading us

We started off by walking 463 steps to the top of the Duomo, admiring its beautiful ceiling painted by Giorgio Vasari and Federico Zuccharo. The ascent was tough, but as we know from Dante himself, it is a necessary and indispensable step toward our goal: Paradise, and the singular form of Good! 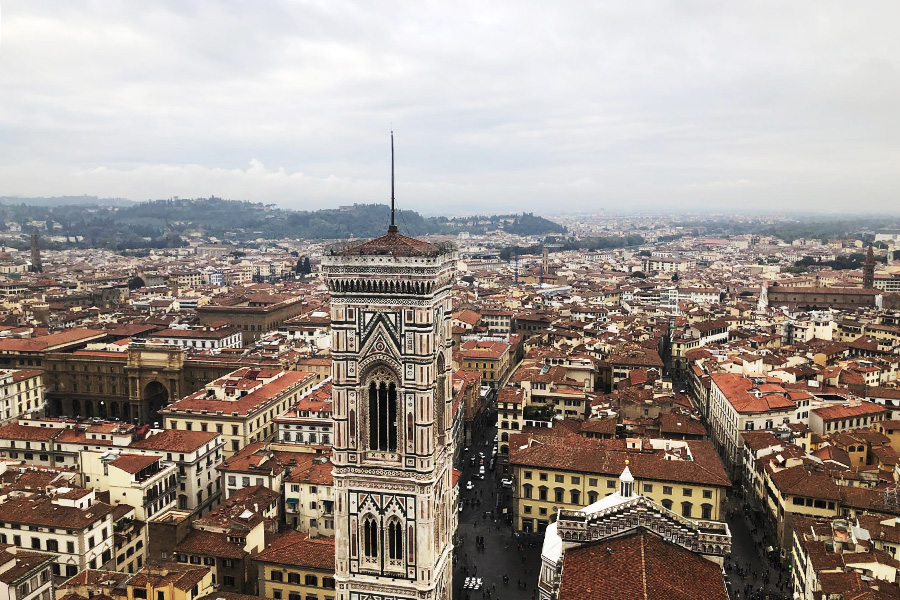 The view from the top of the Duomo

Dante’s theory was definitely proven once we looked down below us at the beautiful landscape of colors. It was an unforgettable moment. Then, right after our first ascent (and descent), we walked up the Campanile tower, an additional 180 steps!

We had a second Modern Adaptation workshop with valuable feedback from Dr. Love and spent our afternoon at the Florentine Baptistery. Seeing Florence from above helped us understand what inspired Dante and personally experience his burning motivation to maintain a spiritual connection with his motherland. The admiration we felt for Florence proliferated with every minute of the trip!

In the evening, we saw a movie at the Cinema Teatro Odeon as a pre-Halloween surprise. 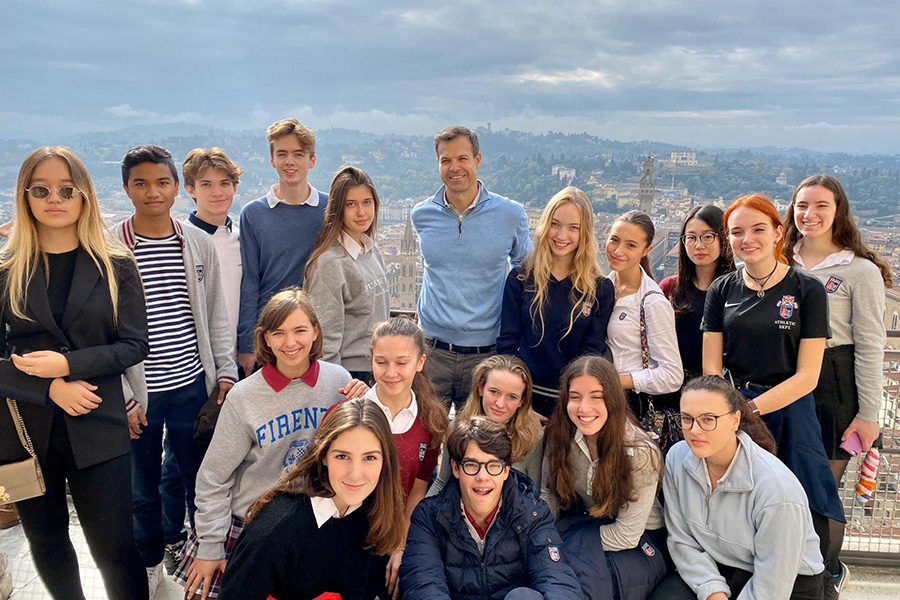 Our group at the top of the Duomo

"The only way to measure the passing of time is through the process of reading."
(St. Augustine’s theory)

St. Augustine’s hypothesis interestingly summarizes how we felt in Florence—wishing the time wasn’t passing by so quickly, and yet, as our understanding of Dante moves forward, we infer that time must, too!

After a morning workshop and a truffle lunch at the market, the highlight of Thursday was our tour of the Uffizi, led by Dr. Love, who turned out to be not just a Dante expert but also an art expert! This was definitely one of my favorite parts of the whole week. 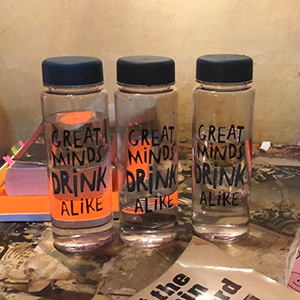 The Uffizi is, in itself, a masterpiece—every corridor is a work of art, and students especially note the beauty of the ceilings. My classmates were shocked by the endlessness of their individual patterns. 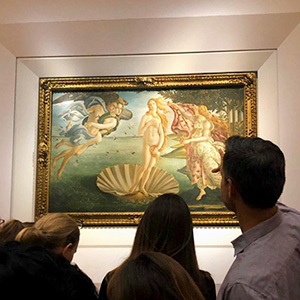 Built in 1560 as offices of Florentine administration by Cosimo de’ Medici and his son, the gallery houses some of the world’s most beautiful masterpieces by the greatest artists. We saw works by Dante’s painters, Giotto and Cimabue; Primavera and The Birth of Venus (my two favorite paintings!) by Botticelli; Da Vinci’s Annunciation; Michelangelo’s Madonna; and Bronzino's meaningful Allegory of Dante Alighieri, along with many other paintings by artists such as Verrocchio and Caravaggio. It was fascinating connecting these works of art to the works of literature that we have studied in class; artists like Botticelli were devoted Neo-Platonists who wanted their work to serve as a metaphorical step towards the ideal Form of grace, for example. Among my classmates, Kent’s favorite painting was Da Vinci’s Annunciation while Alejandra, Lea, and I loved The Birth of Venus, with its delicate colors and graceful details.

"Take joy, oh Florence, for you are so great your wings beat over land and sea, your fame resounds through Hell!" (Inferno, Canto 26, lines 1-3)

Another step towards grace and beauty, more literal than metaphorical, was our visit to the San Miniato Basilica with a truly breathtaking view over the city of Florence. A church he would often attend, here Dante said goodbye to his motherland for the last time before leaving forever, exiled.

The legendary St. Minius founded this church. Because of his devotion to his own religion and his refusal to worship the Roman, pagan gods such as Nessius, he was beheaded and tortured. In response, he picked up his head, placed it on top of this hill and founded the Basilica. The stairs leading up to the church served as a model for Dante’s design of Purgatory. 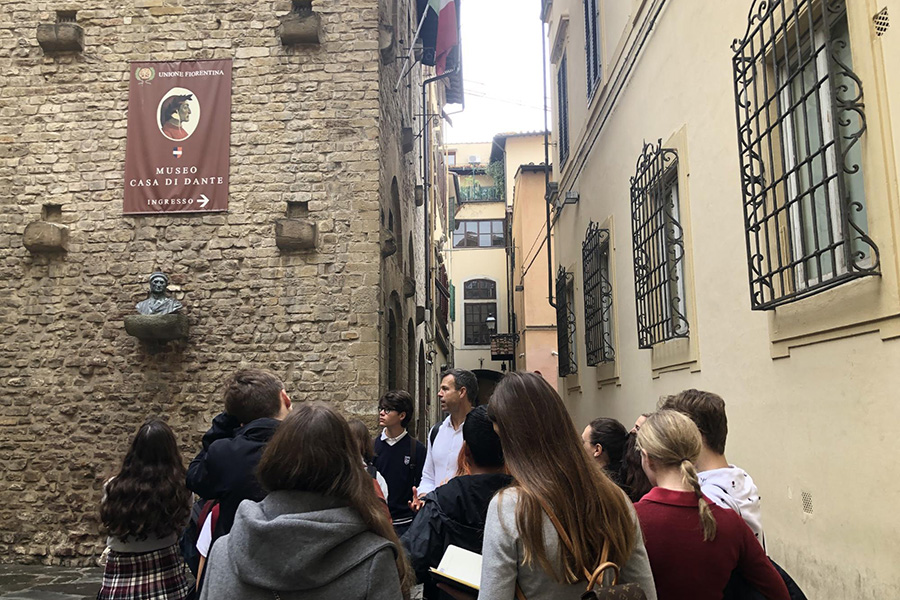 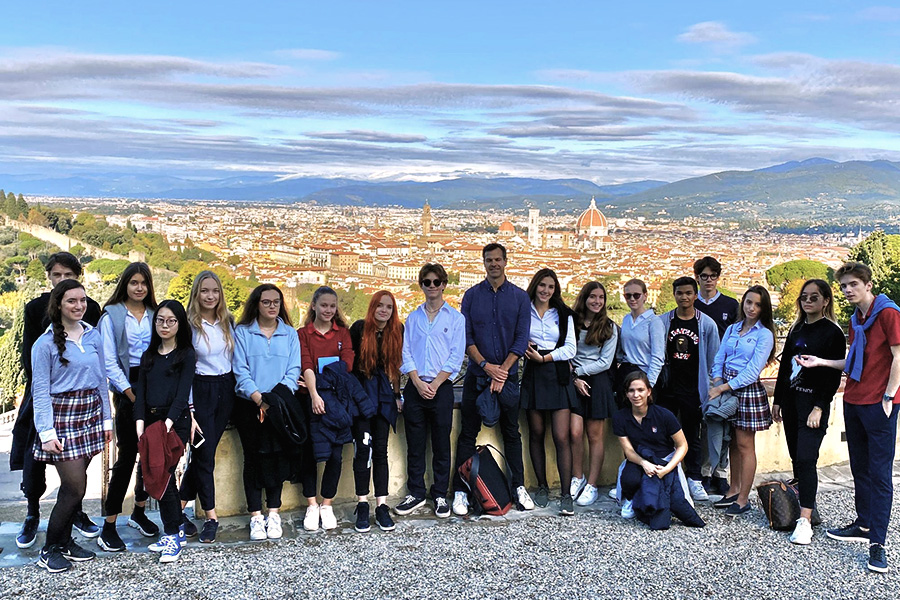 Our group at San Miniato’s Basilica

We, on the other hand, said goodbye to Florence with a scavenger hunt. It was the ideal way to remind ourselves of all we learned during the week. Dr. Love gave us a list of cryptic clues, each indicating a place we had visited and discussed over the course of our trip. Every group of students had to take a picture with each place on the list of clues and return to Dr. Love as quickly as possible.

Our group won first place; we were ecstatic and got an illustrated copy of Dante’s Inferno as a prize!

After some final sandwiches and reflections, our time in Florence was officially over. It passed by so quickly, but, following the theory of translatio, every event has its own significance for all of eternity, whether it is a historical happening, a Biblical story, or a trip to Florence with our Honors World Literature class.

We arrived in Lugano on Friday evening, filled with virtue, knowledge, and priceless memories.

I left for Florence with respect and admiration for Dante and his Inferno, hoping that I would come to understand how he wrote what he did. Now, after visiting Florence, I understand why he wrote this incredible epic, and how he found the immense strength and inspiration for a piece of literature as diverse as his Divine Comedy.

After touring ancient cathedrals, walking to the top of the Duomo, analyzing plaques on the Florentine streets, and trying the famous sandwiches from I Fratellini, I understand what motivated Dante and what motivates poetry itself. When you feel the spirit of a city as unique as Florence, and realize that beauty exists in every street corner, as Dante saw, poetry comes naturally.

It is the purest expression of the unpolluted perception of the soul.